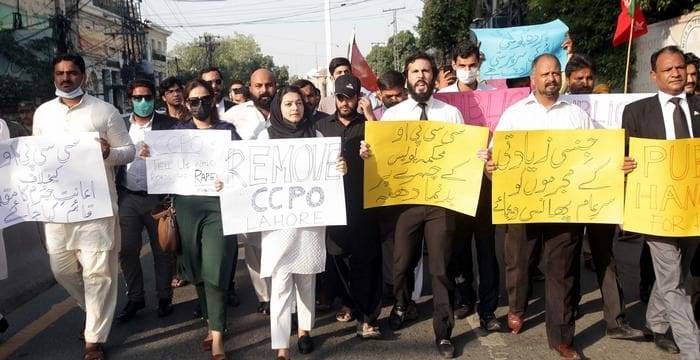 Pakistani police say they have arrested one of the suspects in the rape of a woman who was dragged from her car and attacked after he car broke down on a highway in central Punjab province.

Police say the woman was driving late on Wednesday night outside the city of Lahore with her two children when her car ran out of fuel.

The woman, in her 30s, called the police for help, but two men took her and her children out of the car at gunpoint before police arrived. She was raped in a field along the highway.

The suspects are also accused of stealing cash and jewellery from the woman before fleeing.

Chief of the criminal investigation wing of the Punjab police said the arrest of one man was made after they tracked phone records and collected forensic evidence from the scene.

He says the suspect denies involvement in the rape. Local media reported the suspect handed himself into police to plead his innocence.

There have been protests across Pakistan over the handling of an investigation into the assault.

Prime Minister Imran Khan’s office said the protection of women is a first priority of the government, adding that “such brutality and bestiality cannot be allowed in any civilised society.”

But protesters are still calling for the sacking of the lead police investigator on the case, Omar Sheikh, who reportedly pointed out what he felt the victim had done wrong.

He is reported to have said the woman should have taken a busier highway and not travelled at night and made sure she had enough fuel.

He also said she appeared to believe Pakistan was as safe for women as France, “her country of residence.”

Several hundred protesters gathered in Islamabad, some waving French flags and others with signs saying “Hang The Rapists.”

“It’s very simple, these sort of incidents are not very new, the issue is that rather than catching the criminals or catching the perpetrators, we always blame the victims,” said Aleena Alvi.

“I think the laws have also changed around the rape victims, there was a law of women’s protection act, instead of this act, there has now been no protection that has been given to victims.”

Global rights watchdogs say Pakistan has not done enough to stem violence against women, including ensuring perpetrators are held accountable.

The attack has especially angered women who say public space in the country was already limited.

“And now the police are telling you that you are responsible for your own safety,” said Yamna Rehman at the Islamabad protest, organised by the Women Democratic Front collective.

My Tweets
We use cookies to help identify your computer so we can tailor your user experience, track shopping basket contents and remember where you are in the order process. WTX News Our Cookie Policy
Sunday Papers: PM to opt out of human rights law – Brexit Breach & Covid-19 spiralling again
Daily News Briefing: 86% of doctors in England expect second-wave in the next 6 months
To Top
%d bloggers like this: