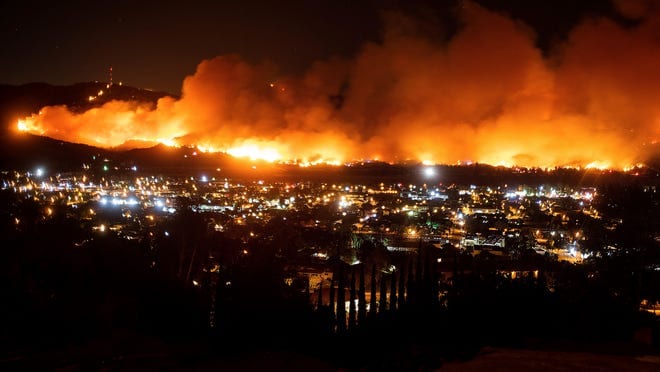 Three people have died in a California wildfire that has forced thousands from their homes, authorities say.

Two people were found dead at one location and a third was found elsewhere, according to the sheriff of Butte County – northeast of San Francisco.

Police told local media that one of the three victims was a motorist who was apparently trying to escape the Bear Fire.

States across the US Pacific Northwest are currently fighting record-breaking wildfires.

California is experiencing more than two dozen wildfires amid being in the middle of a 20-year mega-drought.

The death toll is now at least 11 –  killed in the Californian wildfires since last month. A record number of acres – more than 2.3 million – have been burned this year in the state.

California Highway Patrol Officer Ben Draper told the East Bay Times that one of the three killed was someone who seemed to have been trying to escape the fires.

He said investigators believe the unidentified driver had fled his or her car after driving towards a ditch before being overcome by smoke and flames.

“Somebody was just attempting to flee and it just didn’t work out,” he said.

California not the only state burning

Fires are raging in the states of Washington and Oregon, which is unusual because of the regions cool, damp climate.

Two deaths in Oregon have been blamed on the wildfires, and one in Washington state.

Oregon’s Governor told a news conference on Wednesday: “This could be the greatest loss of human life and property due to a wildfire in our state’s history.”

One Oregon evacuee told NewsChannel 21 about her ordeal.

“Fire on both sides, winds blowing, ash flying – it was like driving through hell,” she said.

Washington’s Governor said on Tuesday that more than double the acreage had been torched in the previous 24 hours that had been burned during all of last year in his state.

According to the National Fire Information Center, wildfires are raging in nine other western states.