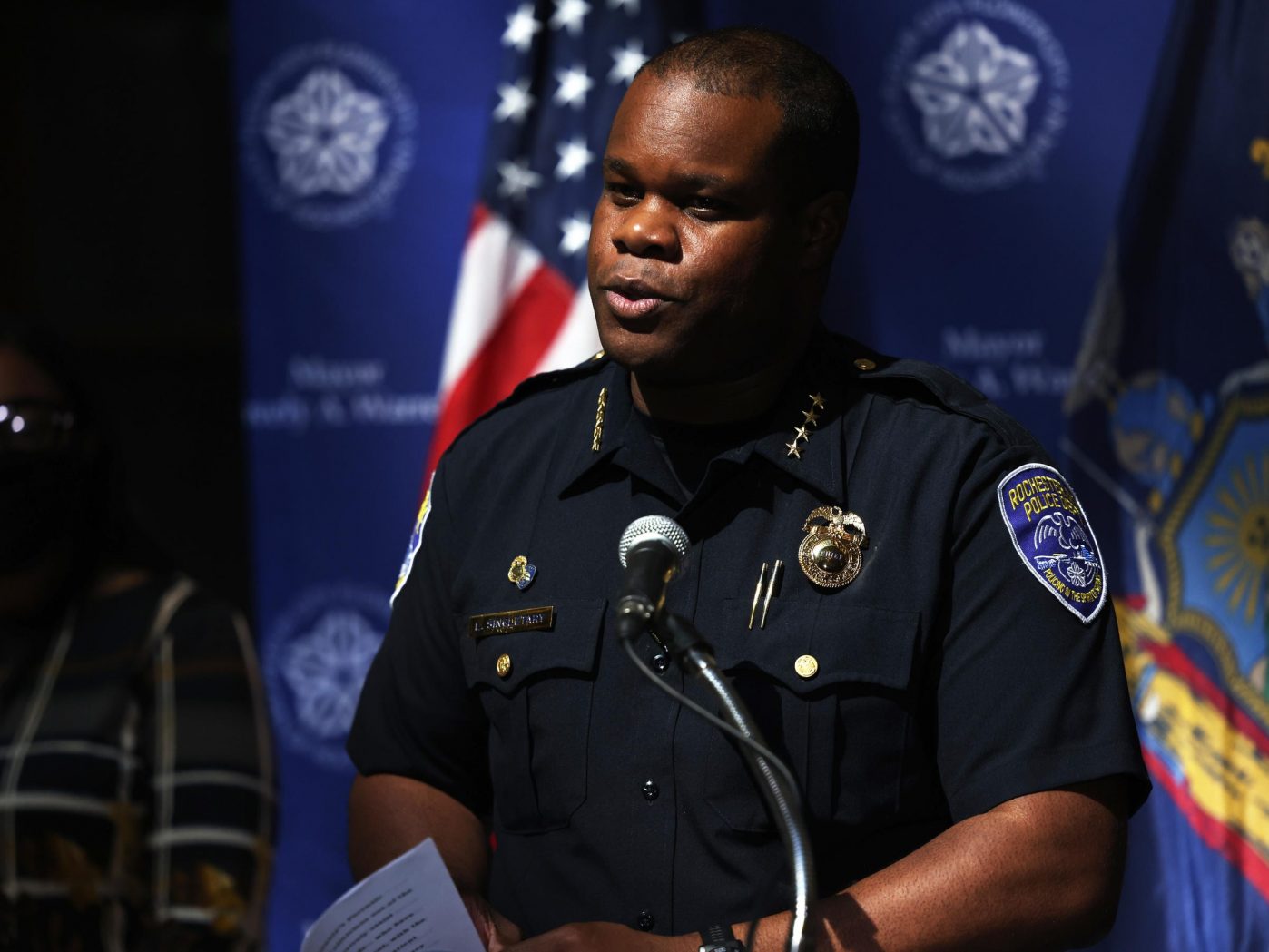 Police chief quits after protests over death of Daniel Prude

Rochester, New York’s, police chief La’Ron Singletary handed in his resignation on Tuesday along with his command staff saying there had been a “mischaracterisation and politicisation” of his actions following the death of Daniel Prude in police custody.

Rochester Mayor Lovely Warren told a City Council meeting that she had not asked the chief to resign, though she said there was “information that was brought to light today that I have not previously seen before.” But, she failed to elaborate.

Rochester erupted with protests last week after body camera footage released last week showed Prude, 41, being pinned to the pavement during his arrest.

Rochester protests over the death of Daniel Prude

The footage was released five months after Prude’s death and has raised questions of a possible cover-up.

Seven police officers involved in the arrest were suspended last week. The medical examiner ruled Prude’s death a homicide by asphyxiation, with the drug PCP a contributing factor. He was having a psychotic episode when he was arrested.

Activists had called for the major to resign, and on Sunday after a weekend of protests, he said he intended to stay on.

“As a man of integrity, I will not sit idly by while outside entities attempt to destroy my character,” Singletary said in a statement, noting his 20 years on the force.

“The mischaracterization and the politicization of the actions that I took after being informed of Mr Prude’s death is not based on facts, and is not what I stand for.”

Mayor Warren has also come under pressure for the handling of Prude’s arrest and death, said the chief’s now-retired deputy, Joseph Morabito. He added, “there may be a number of others that will decide to leave as well.”

Warren apologised to the Prude family last week, suggesting she had been misled by chief Singletary – an allegation he has denied. He also pointed to his ordering of an internal investigation soon after Mr Prude’s death.

The Rochester police’s union head defended the officers last week, saying they had followed the procedure in the use of the ‘spit-hood’ on Mr Prude because he had told them he had Covid-19. He added that chief Singletarty’s office told him after the arrest there were “no concerns” with the officers’ actions.

The mayor said she was unsure when the retirements would take effect.

Free the People ROC – a local Black Lives Matter group – welcomed the resignations in a Facebook post but demanded more.

“Let’s keep the pressure up until all those responsible for Daniel Prude’s murder and cover-up — including Mayor Lovely Warren – have resigned, taken responsibility and donated their pensions to the families they allowed to be harmed,” it wrote.

In Dallas on Tuesday, police department chief Renee Hall agreed to resign after a backlash against her department’s handling of protests against racism and police brutality. She will stay on until the end of the year.

Last month, some Dallas City Council members said they had lost trust in her leadership citing lack of transparency regarding the force that police used that injured some demonstrators.