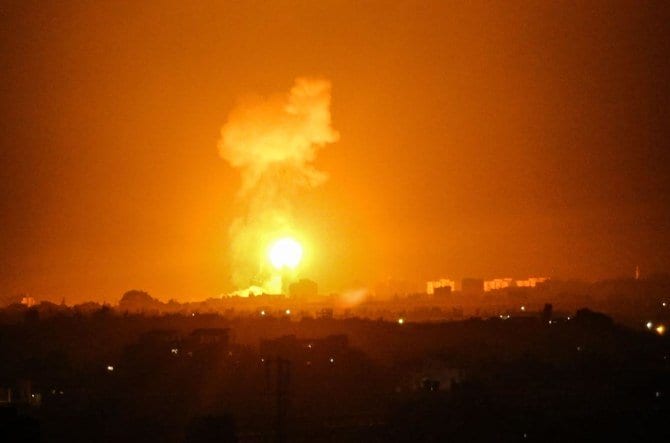 The strikes came as visiting Egyptian security officials strove to defuse the latest attack on Gaza. “Israeli Fighter jets and (other) aircraft struck underground infrastructures belonging to the Hamas terror organization in the Gaza Strip,” an Israeli military statement said.

The impact of a landmark deal between Israel and the UAE is reverberating throughout the region. But the deal has had little significance in abating the heavy-handed Israeli army in attacking the Palestinians.

The UAE is the first Gulf state and only the third Arab country to establish diplomatic relations with Israel. Egypt and Jordan signed peace treaties with Israel in 1979 and in 1994, respectively.

The Hamas source told AFP the group had held talks with the Egyptian delegation in Gaza on Monday before it left the territory for meetings with the Israelis and the West Bank-based Palestinian Authority. It was expected to return to Gaza after those talks were concluded, the source added.

Israel and Hamas have fought three wars since 2008. Despite a truce, last year backed by Egypt, the UN and Qatar, Hamas and Israel clash sporadically, with Palestinian incendiary balloons or rocket or mortar fire drawing retaliatory Israeli strikes and civil sanctions.

“The occupation continued its aggression and carried out airstrikes on Gaza after midnight,” he said, adding that the strikes were seen as a “negative response” to the truce feelers.

Israel has said the retaliation was in response to “explosive and arson balloons launched from the Gaza Strip into Israel.”

Gaza security sources and witnesses said the strikes hit Hamas lookout posts at Rafah in the south of the territory and Beit Lahia in the north. Tensions have been rising for more than a week, with Hamas firing rockets and launching bundles of balloons across the border fitted with incendiary or explosive devices.

My Tweets
We use cookies to help identify your computer so we can tailor your user experience, track shopping basket contents and remember where you are in the order process. WTX News Our Cookie Policy
Bahrain: Woman,54, wearing burqa goes viral for smashing Hindu gods, now charged
Daily News Briefing: 19% of UK adults suffered depression during pandemic
To Top
Weekly