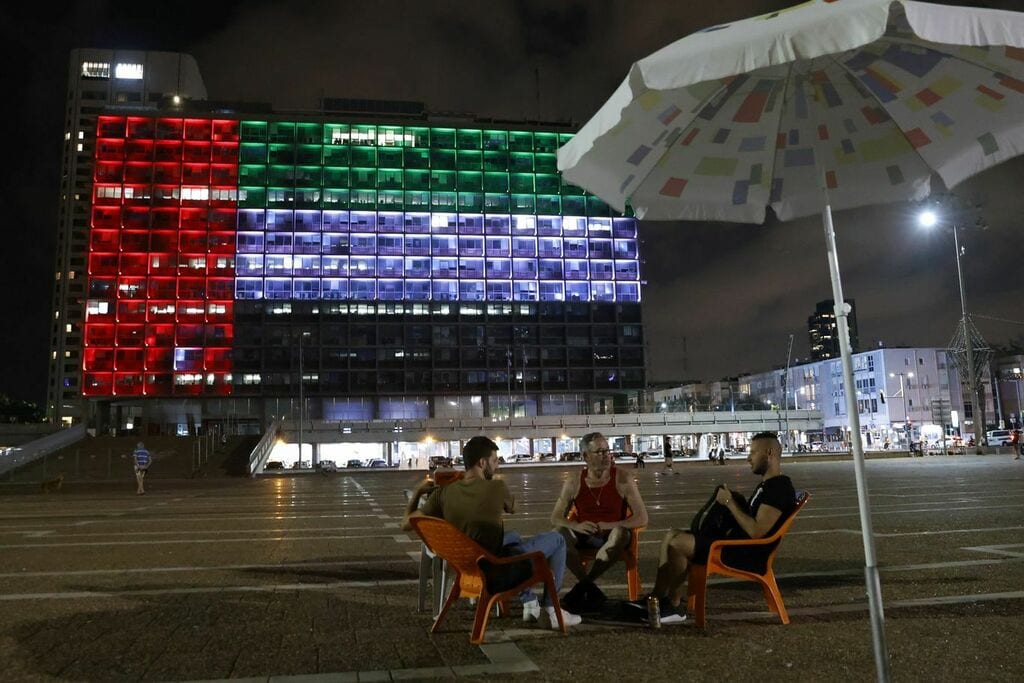 The Israeli and UAE foreign ministers introduced a direct phone service between the two nations on Sunday, in their first announcement following a peace agreement to the normalisation of diplomatic relations.

The UAE and Israel ministers “inaugurated a phone link between the United Arab Emirates and Israel, and exchanged greetings following the historic Peace Accord signed by the two countries,” tweeted the director of strategic communications at the UAE’s foreign ministry.

Shortly after, Israel’s Gabi Ashkenazi tweeted that the two “decided together on the establishment of a direct communication channel ahead of the signing of the normalisation agreement between the two countries and … to meet soon.”

Phone links for the public are also functioning between the UAE and Israel.

The Emirati flag has been raised in the Israeli city of Netanya today, celebrating the peace deal for full normalisation between the UAE and Israel

The Israel-UAE deal – announced by Donald Trump – is only the third such accord Israel has struck with an Arab country and raises the prospect of similar deals with other pro-Western Gulf states.

In a joint statement, President Trump, Israeli PM Benjamin Netanyahu and Crown Prince of Abu Dhabi and Deputy Supreme Commander of the United Arab Emirates Sheikh Mohammed Bin Zayed released a joint statement. The statement said they “agreed to the full normalisation of relations between Israel and the United Arab Emirates.” The statement said the “diplomatic breakthrough” was at “the request of President Trump” and that Israel will “suspend declaring sovereignty over areas outlined in the President’s Vision for Peace and focus its efforts now on expanding ties with other countries in the Arab and Muslim world.”

Israel and the UAE also said they will continue their efforts to “achieve a just, comprehensive and enduring resolution to the Israeli-Palestinian conflict.”

“This historic diplomatic breakthrough will advance peace in the Middle East region and is a testament to the bold diplomacy and vision of the three leaders and the courage of the United Arab Emirates and Israel to chart a new path that will unlock the great potential in the region,” the statement read. “All three countries face many common challenges and will mutually benefit from today’s historic achievement.”

Trump said the leaders of the two countries will meet at the White House in around three weeks to “sign bilateral agreements regarding investment, tourism, direct flights, security, telecommunications, technology, energy, healthcare, culture, the environment, the establishment of reciprocal embassies, and other areas of mutual benefit.” “Opening direct ties between two of the Middle East’s most dynamic societies and advanced economies will transform the region by spurring economic growth, enhancing technological innovation, and forging closer people-to-people relations,” the statement says.

Joint Statement of the United States, the State of Israel, and the United Arab Emirates pic.twitter.com/oVyjLxf0jd

Trump told reporters Israel and the UAE will “begin cooperation across the board,” along with exchanging embassies and ambassadors. The president said he expected other countries to follow the UAE’s lead on this effort to cooperate with Israel going forward.

Under the deal, Israel has pledged to suspend its planned annexation of West Bank territories, a concession welcomed by European governments as a boat for hopes of peace.

But Israel’s Prime Minister Benjamin Netanyahu stated Israel was not abandoning its plans to one day annexe the Jordan Valley and Jewish settlements across the occupied West Bank.