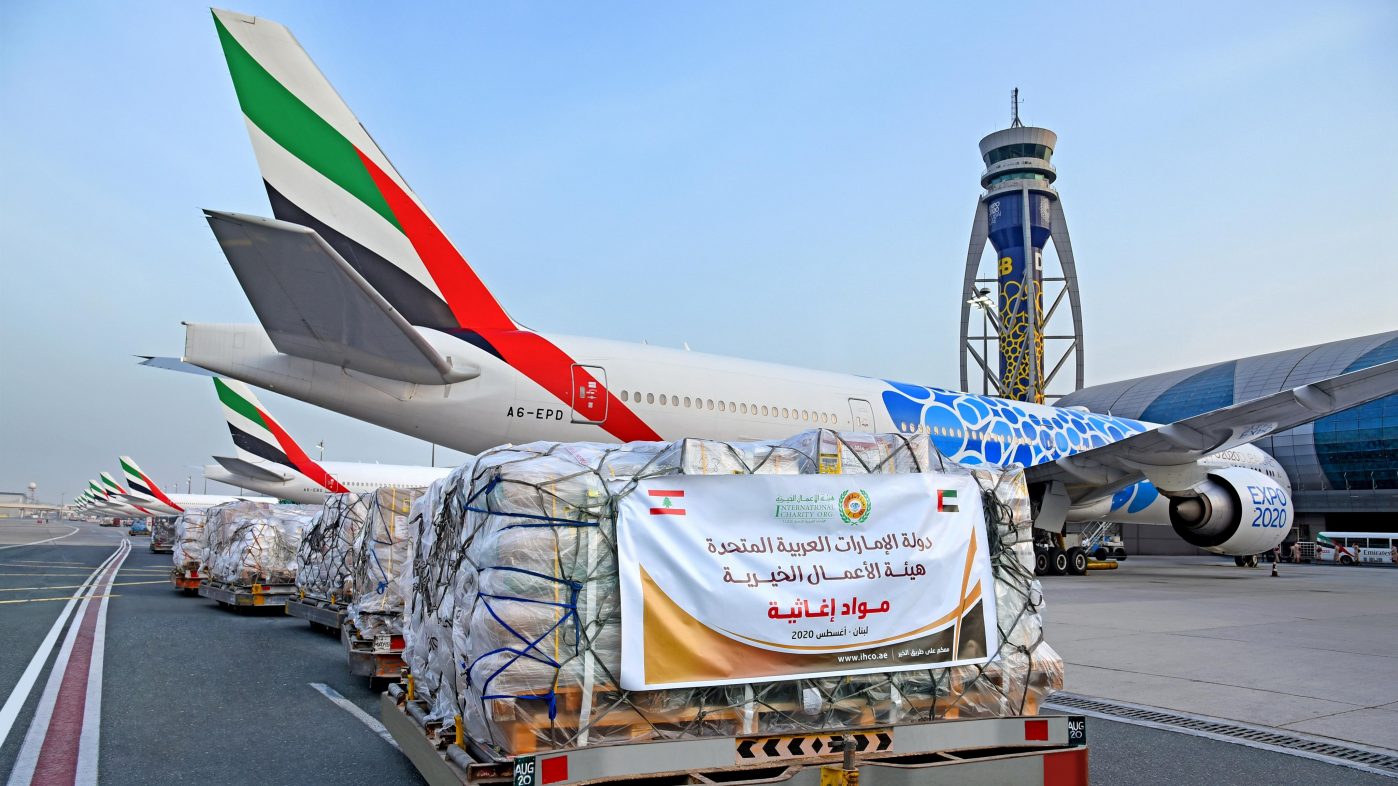 Syringes, bandages and surgical gowns were among the supplies on-board which was worth more than Dh2 million.

At Dubai’s International Humanitarian City, 180 pallets were loaded on trucks for the cargo flight, which took off about 5:45 pm and was flown free of charge on the orders of the Vice President and Ruler of Dubai.

The aid was supplied by the WHO and International Federation of Red Cross and Red Cresent Societies in co-ordination with the Ministry of Health and Prevention.

Teams on the group worked through the night preparing the packages at warehouses in International Humanitarian City – where dozens of aid agencies are based.

The WHO’s Dubai operations manager said the call to prepare aid packages came in from its representative office in Beirut within hours after the blast that killed over 135 people and wounded more than 4,000.

Emergency medical supplies are being sent to Lebanon after the deadly explosion that wounded over 4,000 people

23 tonnes of supplies have been distributed to help hospitals treat about 2,000 patients.

“Overnight we doubled the quantity as more information about the situation came in.”

Ten trauma kits and 10 surgical kits were due to be sent – each kit contains supplies that can treat up to 100 people.

“More may be sent depending on what is needed,” Ms Attalla said.

The warehouse manager for the IFRC said it sent 20 tonnes of PPE including N95 masks, gloves and surgical caps and gowns to protect medical staff from the coronavirus.

“We loaded 94 pallets of PPE on to five trucks. That’s about 20 metric tonnes in total,” George Maina, warehouse manager for IFRC, said.

“We were able to move quickly and our teams worked through the night to prepare the freight, which will soon reach thousands of beneficiaries in Lebanon.

“International Humanitarian City donated the flight, which will carry the items and they provided us with free transport to move the supplies to the airport.”

Reem Al Hashimy, Minister of State for International Co-operation, said the UAE would stand by its neighbours in times of need.

“The UAE’s commitment to [providing] various forms of support in such situations underlines our solidarity with all brotherly and friendly countries in time of crises,” Ms Al Hashimy said.

“We will work to assess the situation to evaluate what further assistance we can provide.”

Crown Prince of Abu Dhabi and Deputy Supreme Commander of the Armed Forces said the UAE is preparing to offer more support to those worst affected by the deadly blast.

The Ruler’s Representative in Al  Dhafra Region and chairman of Emirates Red Crescent will monitor the delivery of this assistance.

It includes medicine and medical equipment, and dietary supplements for children.

The Red Crescent said the aircraft would depart at a later time.

It said the focus would be on medical supplies to help Lebanese clinics during a hugely challenging period.

The UAE has offered a huge outpouring of support and sympathy to Lebanon following the blast.

Khalaf Al Habtoor, founding chairman of Al Habtoor Group, has pledged a month’s worth of urgent medical supplies for hospitals in the country with more than 1,000 beds.

And the Khalaf Al Habtoor Hospital at Hrar, in northern Lebanon, will open auxiliary treatment support for patients who are unable to be accommodated in Beirut hospitals.