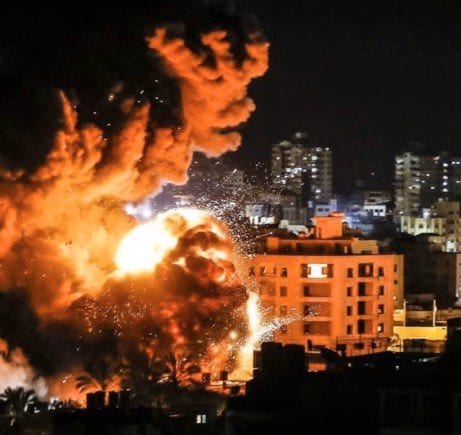 Israel attacked Hamas targets in the Gaza Strip on Thursday in response to what is said were continued launches of “explosive balloons” from the Palestinian territory.

Helium balloons loaded with incendiary material have been deployed in recent days in a bid to pressure Israel to ease its blockade of the Gaza Strip and allow new economic projects. Israel also said it will stop shipments of fuel into Gaza in response.

The Israeli army said in a statement on Thursday it struck “a military compound, underground infrastructure and observation posts,” inside Gaza – Hamas’s “naval force” was also hit.

“The attack was carried out in response to balloons with explosives and incendiary balloons from the Gaza Strip into Israeli territory in the past week … We hold Hamas responsible,” the Israeli army said.

Reports from Gaza said the latest attacks hit sites in Rafah to the south and Beit Hanoun in the north.

According to a Gaza security source, Israeli warplanes carried out several air attacks on Hamas sites. The attacks caused severe damage to some infrastructure and damage to citizens’ homes, but no one was injured.

The air attacks were reportedly the most intense response Israel has launched in the recent rounds of violence.

Balloons and kites with explosives tied to them emerged as a weapon in Gaza during the 2018 protests – the makeshift devices drifted across the border daily, causing thousands of fires on Israeli farms and in communities.

One of the many fires started by Hamas in southern #Israel today by sending over incidinary devices attached to balloons. This must stop! They are burning our country! pic.twitter.com/SCaDpbwq0V

In response to the first two incidents, Israel closed its Karem Abu Salem to Israelis, goods crossing with the Gaza Strip.

Hamas denounced the closure, saying it was “aggressive,” and Israel “bears all consequences and repercussions.” The move showed Israel’s “insistence on laying siege” to Gaza, Hamas said, warning it could cause further worsening of the humanitarian situation in the territory.

Escalating the measures on Thursday, Benny Gantz ordered a halt to fuel imports into Gaza “in light of the continued launching of incendiary balloons from the Strip” towards Israel.

Hamas spokesman called the measure a “grave act of aggression” that “aims to worsen the crisis of our people in the blockaded Strip,”

The Gaza Strip has a population of two million, more than half who live there are living in poverty, according to the World Bank.

Hamas and Israel have fought three wars since 2008. Despite a truce last year backed by the UN, Egypt and Qatar – the two sides occasionally clash.

Palestinian analysts say cross-border fire from Gaza is used as a bargaining tool to secure Israel’s green light for the entry of Qatari financial aid into the territory.

The ceasefire followed a deadly surge in violence and was to see Israel allow new development projects, including an industrial zone and a hospital.

But Hamas has accused Israel of not fully complying with the deal. Israel, which deems Hamas a “terrorist” group, shuns direct negotiations and has never publicly acknowledged the truce.

On Wednesday, Israel reduced the area where it permits Palestinians to fish from 15 miles to eight miles, calling it a response to the balloons.

My Tweets
We use cookies to help identify your computer so we can tailor your user experience, track shopping basket contents and remember where you are in the order process. WTX News Our Cookie Policy
Daily News Briefing: England’s Death toll revised down by more than 5,000
Daily News Briefing: Lockdown to ease further Saturday
To Top
Weekly