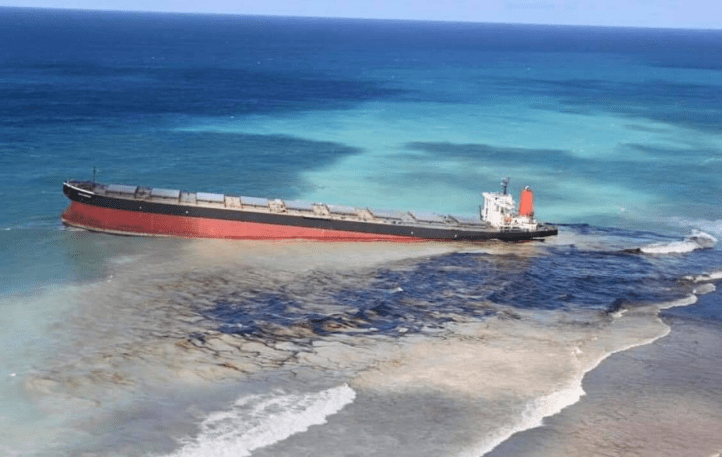 Volunteers are scrambling to create cordons to keep leaking oil from a ship away from the island of Mauritius.

The ship was believed to have been carrying 4,000 tonnes of oil, it ran aground on a coral reef off the Indian Ocean island on 25 July.

Locals are making barriers of straws stuffed into fabric sacks in an attempt to absorb the oil.

Mauritius is home to world-renowned coral reefs, and tourism is a crucial part of its economy.

Others have been using tights and hair to add to the effort and some have been cleaning up the island’s beaches.

They have been told by the government to leave the clean-up to local authorities.

“People have released that they need to take things into their hands. We are here to protect our fauna and flora,” environmental activist Ashok Subron told AFP news agency.

The operator of the ship said it has tried to place its own containment booms around the vessel but had not been successful due to rough seas. Helicopters are attempting to move some of the fuel and diesel off the ship.

Out of the estimated 4,000 tonnes of fuel onboard, it is believed at least 1,000 tonnes of oil has leaked into the waters surrounding the island nation.

Environmentalists are concerned about the impact on the country’s ecosystem.

The ship ran aground at Pointe d’Esny – a known sanctuary for rare wildlife. The area also contains wetlands designated as a site of international importance by the Ramsar Convention on wetlands.

Happy Khamule from Greenpeace Africa warned “thousands” of animal species were “at risk of drowning in a sea of pollution, with dire consequences for Mauritius’ economy, food security and health.

At a news conference the executive president of the operator of the shop “profusely” apologised for the spill and for “the great trouble we have caused.”

He vowed the company would do “everything in their power to resolve the issue.”

Police in Mauritius have been granted a search warrant, allowing them to board the vessel and take away items of interest – such as the ship’s logbook – to help with the investigation. The ship’s captain will assist officers with their search.

On Friday, the prime minister declared a state of emergency and appealed for help.

France has sent a military aircraft with pollution control equipment from its nearby island.

On Sunday, Japan announced it would send a six-member team to assist the French efforts.