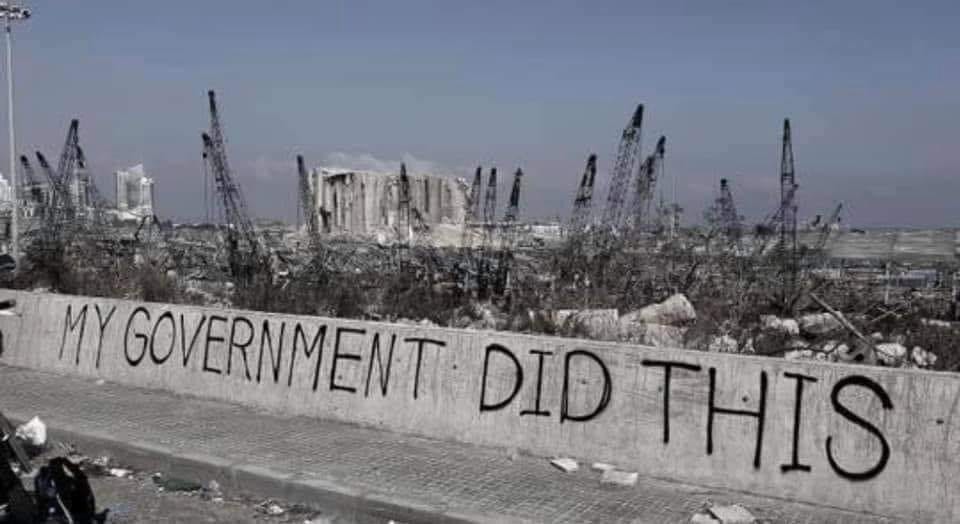 The Lebanese government is heading toward a mass resignation on Monday following the horrific explosion in Beirut.

The explosion killed more than 150 people and left at least 6,000 wounded with hundreds of thousands left homeless.

The explosion has further fueled public anger after it was confirmed authorities knew the huge pile of ammonium nitrate had been stored at the port for six years, with people already enraged by government corruption, incompetence and negligence.

Several ministers have already discussed the possibility of stepping down – with Information Minister Manal Abdel Samad announcing her departure on Sunday.

“I apologise to the Lebanese people for failing to fulfil their aspirations,” she said. “Change remained elusive. Since reality did not match the aspirations, and after the horror of the Beirut disaster, I, therefore, submit my resignation from the government.”

Environment Minister Damianos Kattar told Prime Minister Hassan Diab during a meeting on Sunday: “My kids’ friends died during the Beirut explosion and I cannot keep on performing these responsibilities in the ministry.”

Sources told Arab News that the PM urged ministers who wanted to resign on Sunday to hold off until a Cabinet meeting on Monday to discuss a mass resignation rather than individual ones.

There will be an open session of Parliament – starting next Thursday – to discuss with the government “the crime that has afflicted the capital and the people.”

If the government announces its resignation on Monday, it will turn into a caretaker government until a new government is formed.

There is no specific deadline for the president to call for parliamentary consultations to appoint a new prime minister.

“This is what happened in previous governments and it took a long time, but with the current circumstances, consultations are supposed to take place quickly,” Dr Assem Araji, a member of the Future Parliamentary Bloc told Arab News. “We are facing a big problem. A crime resulted from negligence, and there is a huge humanitarian tragedy that requires an international investigation to find out who is responsible for this crime.”

‘No trust in local investigation’

MP Neemat Frem announced his resignation from the headquarters of the Maronite Patriarchate – 24 hours after the resignation of the Kataeb Party’s three lawmakers on Saturday, and MP Marwan Hamadeh from the Progressive Socialist Party.

The head of the Lebanese Forces party talked about work being done to “aid the republic by ridding it of this parliament.”

He tweeted: “We are making the necessary calls and exerting strenuous efforts to collect enough resignations and reach early parliamentary elections as soon as possible.”

Rep Sethrida Geagea said: “The resignation of the 15 MPs of the Lebanese Forces are in our pockets, but we will only submit them when we are sure that they will ultimately lead to the fulfilment of what those who have entrusted us demand, that is, the departure of this brutal authority.”

Maronite Patriarch Bechara Al-Rahi in his first sermon since the blast called for an international investigation to uncover and announce the full facts, with the obligation to hold accountable everyone responsible for this massacre, regardless of their status.

In a statement issued by his media office, Aoun said: “The demand for the international investigation is aimed at misleading the truth. The judgment will be meaningless if it takes too long to be issued. The judiciary must be swift because delayed justice is not fair. It must be immediate and without haste to ascertain who is a criminal and who is innocent.”

The Bishop of the Greek Orthodox Church of Antioch for the Archdiocese of Beirut warned in his Sunday sermon: “If we do not adopt a policy of reward and punishment, things will not be straightened, and attacks on the people and their rights will continue.

He added: “In a country that respects itself, officials resign when unable to fulfil their duties or if they fall short in some places. Here, officials are sitting on their chairs and the people are suffering one calamity after the other.”

Local and international rescue teams are continuing their search for those missing in the wreckage – dozens of people remain missing.

“The military teams working at the site of the explosion used accurate sensors to find out if there were chemical, radiological or biological materials, but none were found,” an officer from the Lebanese Army told Arab News.

According to the military source, this meant that “there were no missiles used in the bombing process. The explosion turned the place from land into a watery bay.”

One of the military divers told Arab News: “When we dived to search for bodies, we found large piles of wreckage that were thrown into the seabed, preventing any ship from anchoring in the dock that was hit by the explosion. We also found dead turtles and recovered a body that was thrown by the explosion 500 meters away from the site.”

Beirut Port is increasing its efforts to resume activity at the undamaged parts of the port so goods can continue to be delivered and there is food security for the Lebanese. Work is underway to secure an alternative berth to receive ships of wheat and deliver them directly to mills, according to the National Information Agency.

The Lebanese Army said 108 soldiers – including eight officers – were injured in clashes with protesters on Saturday night in Beirut, two of the officers have been seriously injured.

My Tweets
We use cookies to help identify your computer so we can tailor your user experience, track shopping basket contents and remember where you are in the order process. WTX News Our Cookie Policy
Daily News Briefing: only 53% of Britons would definitely have vaccination
Volunteers desperately trying to keep 4,000-tonne oil spill away from Mauritius
To Top
Weekly