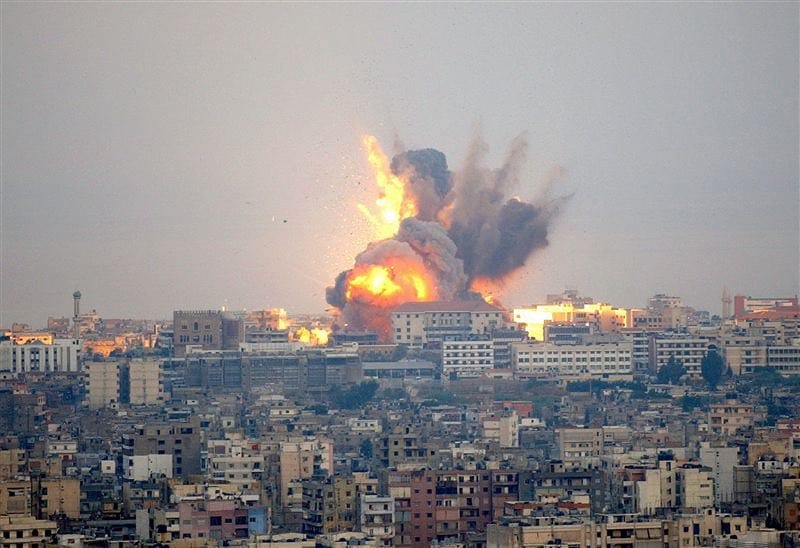 Beirut explosion: 250,000 homeless as officials deflect blame for the explosion

Hundreds of thousands of people in Beirut are facing another night of uncertainty following the massive explosion that destroyed their homes and prompted a two-week state of emergency.

The massive port explosion in the Lebanese capital has displaced some 250,000 people and caused up to  $5bn in damage, Governor Marwan Abboud told local media.

As of Wednesday, the confirmed death toll had topped 130 people with some 5,000 others wounded.

Lebanon has asked the international community to support the country which is already in a major economic crisis and is facing a surge in coronavirus outbreaks.

The Eiffel Tower switched off its lights in a symbolic tribute to the victims of the warehouse explosion in Beirut. A candlelit vigil was held outside the Sacre Coeur basilica in Paris https://t.co/2mtCm2MLNn pic.twitter.com/9GOqByOoEH

UNITY IN TRAGEDY: Tel Aviv municipality lights up with the Lebanese flag as an act of solidarity following deadly explosion in Beirut which took the lives of at least 100 civilians & left thousands injured. Israel has also offered to treat wounded victims in their hospitals. pic.twitter.com/LWKtiu7Grk

A number of countries have offered their support, and many charities, authorities and social media users are rushing to find food, water and shelters for those displaced.

In just 24 hours, human rights group Impact Lebanon raised over $2m in donations, while ThawraMap, an online platform used to identify locations for Lebanon’s anti-establishment protests, has been sharing a list of available shelters across the city.

The Lebanese Red Cross has set up temporary shelters with food, hygiene kits and basic needs across Beirut to house up to 1,000 families.

People online have been offering their help. Using the hashtag #OurHomesAreOpen in both Arabic and English – people have been providing their names, phone numbers and locations of the accommodation.

“Please DM me if you or anyone you know needs shelter,” wrote Twitter user Joelle Eid.

The explosion is a further blow to the country already in a serious economic crisis and growing anger amongst many residents who have spent the last few months in mass protests demanding an overhaul to the country’s political system.

Lebanon’s currency over the last few months has plummeted, businesses have closed, savings have been lost and unemployment has increased  – almost half the country is living below the poverty line.

Food is a major worry too. Prior to the explosion – which also damaged silos containing much of the country’s grain – inflation of basic foods soared by 109 per cent between September and May.

Some 250,000 people are now homeless following the massive port explosion

As a government-led investigation is underway to find out what caused the massive explosion that ripped through the capital, officials are attempting to shift blame.

The government said those responsible for guarding and storing at Beirut’s port – the epicentre of the blast – would be placed under house arrest.

Anger turned to rage after revelations that officials knew the highly volatile material had been stored at the port for more than six years. It has led the country’s officials trying to shift blame onto other branches of the state – including Lebanon’s judiciary.

“No minister knows what’s in the hangers or containers, and it’s not my job to know,” Public Works Minister Michel Najjar told Al Jazeera.

Najjar said he learned on Wednesday that his ministry had sent at least 18 letters to the Beirut urgent matters judge since 2o14, asking for the goods to be disposed of.

“The judiciary didn’t do anything,” he said. “It’s negligence.”

But Nizar Saghieh – a leading Lebanese legal expert – said the “primary legal responsibility here is on those tasked with overseeing the port – the port authority and the public works ministry, as well as Lebanese Customs.”

“It is certainly not up to a judge to find the safe place to house these goods,” he told Al Jazeera.

The resilience of the Lebanese people is inspiring. Look at this. Volunteers in the street of #Beirut clearing the rubble. @akhbar pic.twitter.com/9zNggHJDaW

Many Lebanese are demanding accountability and answers as to how and why 2,750 tonnes of highly explosive material was stored near residential Beirut for more than six years.

But few feel confident they will see justice for this latest disaster, pointing to the lack of official accountability for the period of corruption and mismanagement in the years after the country’s civil war.

Lebanon’s Prime Minister has promised this time will be different.

He is heading an investigation committee that includes the justice, interior and defence ministers and the head of Lebanon’s top four security agencies: the Army, General Security, Internal Security Forces and State Security.

In the meantime, officials in the executive authority have attempted to cast suspicion on Lebanon’s judiciary.

The committee has been tasked with reporting its findings to Cabinet within five days, and Cabinet, in turn, will refer those findings to the judiciary.

In the meantime, officials in the executive authority, including Najjar, a minister in Diab’s government, have attempted to cast suspicion on Lebanon’s judiciary

My Tweets
We use cookies to help identify your computer so we can tailor your user experience, track shopping basket contents and remember where you are in the order process. WTX News Our Cookie Policy
Daily News Briefing: Ethnic minorities ‘overexposed’ to Covid-19
Daily News Briefing: Safety concerns halt use of 50 million NHS masks
To Top
Weekly