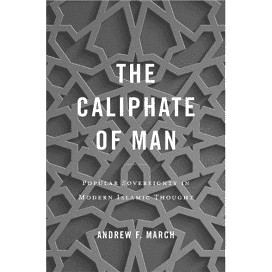 Short review of a book written by Andrew F March ‘The Caliphate of Man’ review by the bookworm Yvonne Ridley.

So I read the title of this book and thought “Oh no! Not another Islamophobic, pseudo-intellectual squaring up to have yet another go at the Muslims.

I was wrong on several counts.

Baby-faced author Andrew F March is indeed an intellectual, an Associate Professor of Political Science at the University of Massachusetts and he does have a proven track record of writings on Islamic matters that are indeed worth reading.

He also offers something relatively new and fresh in his latest book called The Caliphate of Man, popular sovereignty in modern Islamic thought. It’s a bit of a mouthful but that is the way these days since everything is driven by search engines and the internet.

Basically, the book explores the much talked about democracies, or lack of them, in the Middle East. The focus is very much on Muslim political thought which is too easily dismissed by Western politicians and the media who find it all simply too challenging for their tabloid thinking.

A short review of a book

A good starting point for March, naturally, is The Arab Spring, or The Arab Awakening as I prefer to call it. It was this seismic event across the MENA region that triggered what turned out to be a real crisis in political Islam so it was no surprise when the preface and the early chapters focussed on the events of 2011 onwards.

March also travels back over the last century as he searches for answers. Writing in a clear, concise style – and without the usual hysterical polemics we get whenever movements like the Muslim Brotherhood or Jama’at-iIslami or heavyweight scholars and thinkers like Ayatollah Ali Khomeini, Sayyid Qutb and Yusuf Qaradawi come into the frame, he examines in close detail the political change which has influenced today’s Arab world and the ongoing challenges.

Of course, we all know that the fledgeling democracy in Egypt which swept in the first-ever democratically elected president, the late Muhammad Morsi, was crushed before it had a chance to blossom never mind flourish.

The very notion of democracy has sent tsunamis of fear throughout the dictatorships and tyrants who make up the Arab world.

Sadly Egypt has reverted back to its old tyrannical ways, in fact, I doubt this book would have been allowed space at the 51st Cairo International Book Fair earlier this year. In addition to banning numerous publishing houses, books by famous Islamic thinkers and figures, most notably Yusuf Al-Qaradawi, Sheikh Al-Ghazali, the founder of the Muslim Brotherhood, Hassan Al-Banna, and Sayyid Qutb were all banned.

However, while the growth, development and maturity of political Islam were snuffed out in Egypt it has fared better in Tunisia where it is called anything other than political Islam.

March highlights the differences between Islamists and Arab nationalists who both claim they want to rescue and save the people from the current tyrants and despots who litter the Middle East.

The Islamists tend to lean on Shari’ah law as the foundation of proposed democracies whereas the nationalists want to see a strong man at the helm as their leader which is why Nasser and Saddam were iconised by the people. However, the reliance of one man never works well although the Assad dynasty is still hanging on in Syria while Libya is rapidly disintegrating into a failed state as some desperadoes try and revive the idea of another Gaddafi figure.

Personally, I would have liked to have seen more of an expansion into this area by March – a sort of dictator versus shariah scenario although neither of these ideas of sovereignty between competing ideological movements has really emerged supreme.

March sees the conceptual framework of the modern nation-state as one that many Islamic thinkers have gladly rushed into rather than looking beyond. Faced with three kinds of strategies he identifies as apologetics, reappropriation and gene-splicing – this has resulted in Frankenstein monster-style governances.

In other words, attempting to democratise Islamic constitutional theory is proving to be an irresolvable internal contradiction between a modern state and divine sovereignty.

here’s one of my favorite profs w/ whom i’ve ever studied, andrew f. march, on ‘islamism, liberalism, & dem. theory’ https://t.co/F8u5L45gy6

Sadly the idea of popular sovereignty by and for the people is all but snuffed out. The attempts at divine sovereignty and the demand to restore the shari’a in modern societies has also proved to be a catastrophic failure. March seizes on the diversity and tensions of modern political Islamist thought using the theory that Islamist thinkers generally view the people — known as the Muslim Ummah — as being the living embodiment of the Shari’ah and God’s Will whereas secular political thinkers view the people as the sole embodiment of sovereignty, law and political rights.

March writes:  “A core thesis of my analysis is that the divine and popular elements in Islamic democratic theory are often derived from the same commitments and materials.”

He then expands on this by adding: “The political theology of popular sovereignty in Islam is that the Ummah has been entrusted by God with the realisation of His law on Earth. God is the principal-agent and actor, and the first response of the people-as-deputy is a passive and receptive one. But the force of God dignified mankind as His caliph is that He has deputised no one else between God and man — no kings, no priests, no scholars.”

So the compromise emerging is one of dual sovereignty, where the law is both divinely decreed and exercised through the will of the people at the same time although Islamists fighting a losing battle in Syria are still reluctant to accept this; by the time they wake up to the realities, I fear it will be too late.

March identifies the obvious tensions between the religious and secular; they’re obvious to see and yet the obvious bypass so many Islamic political thinkers.

Idealists like Abu’l-A’la Mawdudi and Sayyid Qutb tried to pursue this doctrine but the reality of the Arab Spring, or The Awakening of 2011, threw up the melting pot of democracy, popular sovereignty and a blend of Islamist thought. Pleasing anti-regime protesters of all flavours basically failed in the end in Egypt thanks to the brute force of the military. However the dream of dual sovereignty is still alive in Tunisia, there are flickers of it in Algeria but critical engagement with the people is necessary if the Arab world is to flourish.

And let’s face it the story from Yemen, Syria and Iraq is one of disaster as other dictators use the lands as battlegrounds to settle old scores.

The Caliphate of Man offers some harsh lessons in seven fat chapters. But I suspect The Awakening or the Arab Spring was just a foreshadowing of what could become one of the most interesting centuries in the Arab world’s history. I don’t think we’ve heard the last of that enduring cry Ash-shaʻb yurīd isqāṭ an-niẓām  “the people want to bring down the regime” but what the people do not want to do is replace it with more tyranny.

Personally speaking, I’d like to see Andrew F March write about The Caliphate of Woman – history has shown that wherever and whenever women have stood shoulder to shoulder with the men in governance and rule from East and West it has been a success. A quick look at The Organisation of Islamic Cooperation (OIC) and The Arab League shows that we are a long way from that goal at the moment.

The Caliphate of Man is a costly tome printed by The Belknap Press, a division of Harvard University Press and will set you back £36.95 with the kindle edition still costing over £30. Personally I would order it from your local library unless lockdown prevents that.