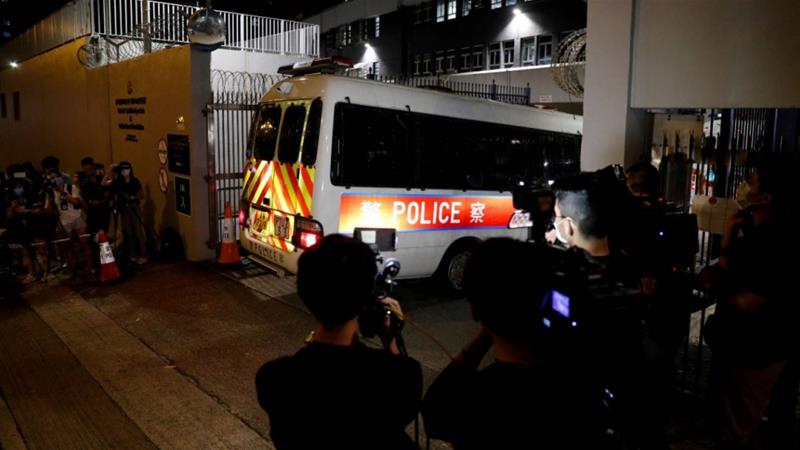 Hong Kong police have arrest four people including a 16-year-old, for suspected offences under the city’s new controversial national security law. The arrests are the first detentions outside of street protests since the legislation came into effect a month ago.

A police spokesman said three men and a woman, all students, were suspected of being involved in an online group that pledged to fight for an independent Hong Kong.

“We arrested for … subversions and for the organising and also the inciting [of] secession,” said Li Kwai-wah, police superintendent at the Hong Kong National Security Department.

The group – Student Localism – said in a statement that its former leader Tony Chung, 19, was among those arrested.

And another former member who was arrested by local politicians and media has been identified as Yanni Ho. Two others were not identified. The eldest person detained is 21-years-old.

“That four young people could potentially face life imprisonment on the basis of some social media posts lays bare the draconian nature of the national security law,” Amnesty’s Asia Pacific Regional Director Nicholas Bequelin said in a statement. “The idea that anybody can now be jailed for expressing their political opinion on Facebook or Instagram will send a chill throughout Hong Kong society. No one should be arrested solely for expressing an opinion that is contrary to that of the government.”

Beijing imposed the national security law in the city on the evening of July 1, when it traditionally marks the 1997 handover from Britain, Under the “One Country, Two Systems” framework, China is supposed to guarantee freedoms and Hong Kong’s way of life for at least 50 years.

“The gross misuse of this draconian law makes clear that the aim is to silence dissent, not protect national security,” said Sophie Richardson, China director at Human Rights Watch.

The legislation outlaws what Beijing loosely defines as secession, subversion, terrorism and collusion with foreign forces with up to life in prison.

It has been condemned by some Western governments, business leaders and human rights groups who say its an attempt by Beijing to tighten its grip over the city. In response, they have suspended extradition treaties with Hong Kong and loosened migration rules for Hong Kong residents.

Beijing says the law is crucial to plug gaping holes in national security defences exposed by anti-government protests that began in June 2019.

Authorities in Beijing and Hong Kong say the law will only be used to target the “troublemakers.”