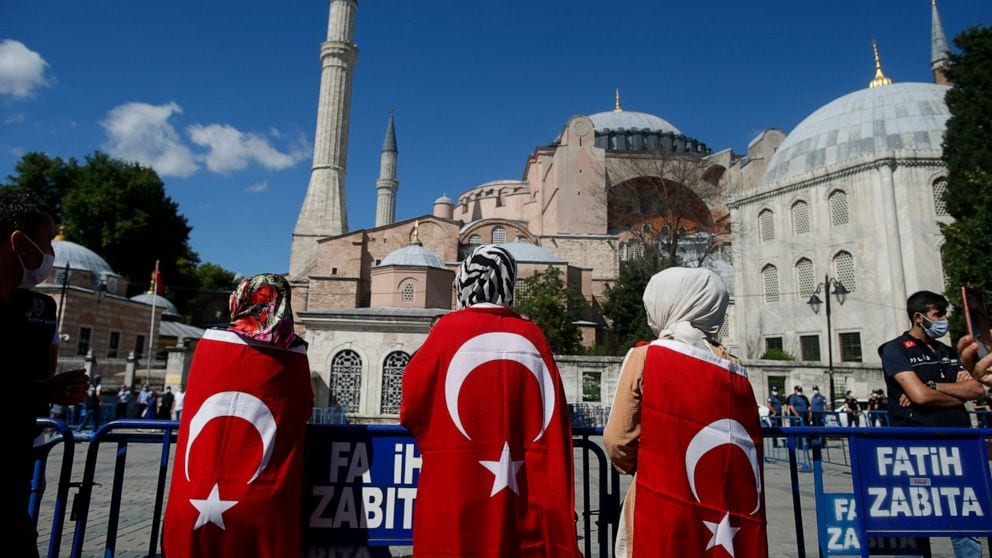 Thousands of worshippers flocked to Turkey’s iconic Hagia Sophia for the first Muslim Friday prayers since the 1930s. to the delight of Turkey and the Muslim world, it was once again declared a mosque instead of a museum by a decree from President Recep Tayyip Erdogan.

The former Byzantine cathedral that became a mosque with the 1453 Muslim conquest of Istanbul and then a museum in 1934 after Turkey became a secular republic a condition of the British and Americans in order to support the power grab by Mustafa Kemal Ataturk. Additionally, Italy and Greece also suggested unless that if it was converted to a museum the European countries would halt any further invasions.

President Erdogan announced the move to convert the historic building back into a mosque earlier this month after a court ruling paved the way for this to take place. It had been a mosque for over 500 years before that.

The UNESCO World Heritage Site was previously a museum, documenting the landhttp://www.justice.gov.uk/courts/procedure-rules/criminal/docs/2011/crim-pr-form-part22-defence-statement-aug-2011.pdfmark’s diverse religious history as both cathedral and mosque. The Byzantine-era building had been shut temporarily due to the coronavirus pandemic. But it had spent the majority fo the last century as Mulsim place of worship. Until the fall of the Ottoman Empire, where it was converted to a museum.

Thousand of Turks and International guests gathered for the re-opening of the Grand Hagia Sofia as a Masjid and the congregation of first Jumma prayers for 86 years.

Juma or Friday prayers began with a swarm of international media at the newly renamed Grand Hagia Sophia Mosque at around 1.15 p.m. local time (1015 GMT).

President Erdogan arrived ahead of the ceremony along with the head of top religious authority Diyanet, Ali Erbas, and top ministers. And recited verses from the Quran, before the Friday sermon started.

Almost the entire Turkish and global Muslim population have supported this decision but there have been some protests. Almost every channel in Pakistan and Malaysia live-streamed the historic event, as well most the ethnic channels in the UK.

The high-profile guests wore face masks as a preventative measure against COVID-19. In total around 500 dignitaries were invited to attend.

The head of Turkey’s religious authority, Ali Erbas, on Thursday announced the appointment of the three imams who will lead prayers at the reconverted mosque: Mehmet Boynukalin, a professor of Islamic law at Istanbul’s Marmara University, and Ferruh Mustuer and Bunjamin Topcuoglu, the imams of two other Istanbul mosques.

Authorities have designated segregated areas outside of the Hagia Sophia for men and women wanting to join Friday’s inaugural prayers.

Several roads leading to Turkey’s iconic Hagia Sophia Mosque are being blocked. Authorities have said as many as 17,000 security personnel would be on duty.