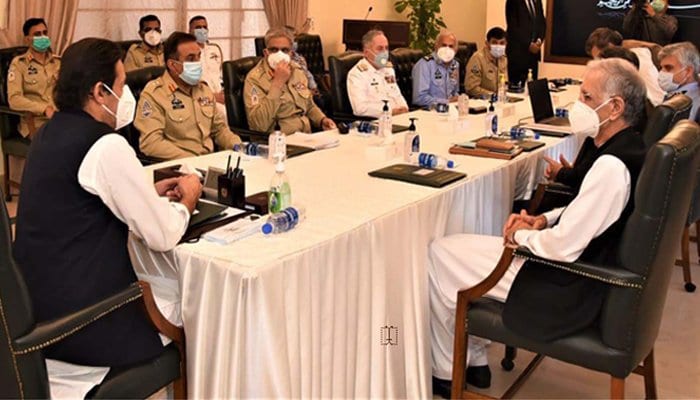 A high-level meeting coordinated by Prime Minister Imran Khan on Friday reviewed internal and external security situation where Pakistan sends India a warning. India must not test the resolve and sovereignty of the country which would be protected at all costs.

The meeting was attended by high-rank officials including Minister for Defence Pervez Khattak, Chairman Joint Chiefs of Staff Committee General (CJCSC) Nadeem Raza, and the Chief of Army Staff.

The participants of the meeting agreed that Pakistan believes in peaceful co-existence with its neighbours. However, it sent a daring message to India ‘Pakistan sends India a warning that we will not tolerate such indiscretions and have the capacity to respond’ to defend the people of Pakistan and territorial integrity will be upheld at any and every cost.

This was a very open and public warning to the Indian government following the Karachi Stock Exchange attack which, according to Pakistani ISI reports was carried out by Indian Terrorists from Balochistan.

The meeting also paid glowing tributes to the bravery and coordinated efforts of Law Enforcement Agencies that successfully thwarted the recent attack on Pakistan Stock Exchange.

Four terrorists attacked the Pakistan Stock Exchange in Karachi earlier this week, as a result of which a policeman and three security guards of the stock exchange were martyred while all four terrorists were killed in the retaliatory action by the forces.

Armed militants had arrived at the PSX compound in a sedan and attempted to enter it from the parking ground side, according to initial reports and eyewitness statements. They were seen shouldering backpacks and carrying automatic weaponry in an amateur video captured by an eyewitness.

The equipment, arms and ammunition recovered from them indicated that they had come prepared for a long siege.

After failing to enter the compound, the militants launched a gun and grenade attack and attempted to storm the building while opening indiscriminate fire. They were engaged by security personnel posted and failed to make headway amidst the heavy exchange of fire.

The entire locality was later cordoned off by security forces and a search and clear operation was launched. The PSX was evacuated and the car that the militants arrived in was taken into custody.

Prime Minister Imran Khan said on the floor of the parliament on Tuesday that Pakistan had “no doubt” that India was involved in the attempted attack on the Pakistan Stock Exchange in Karachi that took place earlier this week.

Apart from committing human rights violations in LoC, India is seeking to change the demographic structure of the Kashmir valley

Indian media outlets have claimed that Pakistan has deployed “almost 20,000 additional soldiers” along the LoC in Azad Jammu and Kashmir and GB “to match Chinese deployments on the LAC (Line of Actual Control) in the east”.

“The level of troops Pakistan has deployed is more than what it did after the Balakot airstrikes. Pakistani radars are believed to be fully activated all along the region too,” a report by Economic Times said.

Furthermore, the publication claimed that meetings have been held between China and Pakistan officials and the former is also holding talks with the Al-Badr outfit in order to “incite violence” in occupied Kashmir.

Foreign Minister Shah Mehmood Qureshi on Friday once again reiterated and stated Pakistan sends India a warning, that the regional security situation was deteriorating due to India’s expansionist policies in the region.

In a telephone conversation with Chinese State Councilor and Foreign Minister Wang Yi, Qureshi said that apart from committing egregious violations of human rights in occupied Kashmir, India was seeking to change the demographic structure of the occupied territory.

Qureshi also briefed his Chinese counterpart about the repeated violations committed by India across the Line of Control (LoC) as well as targeted killing of civilians.