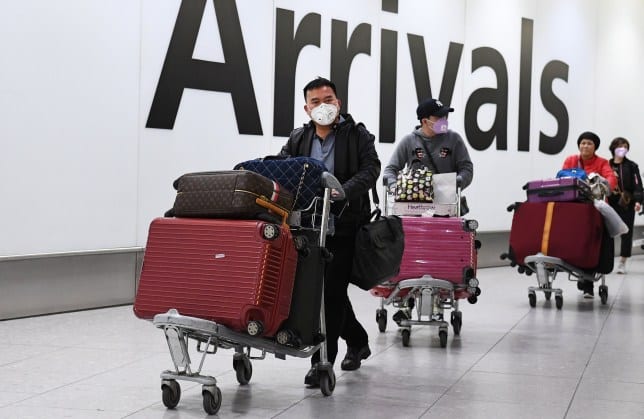 Quarantine is abolished for People arriving in England from some countries

Quarantine is abolished fr travellers from a select number of countries posing “a reduced risk” from coronavirus outbreak. A full list of exempt countries was published on Friday.

Most travellers to the UK currently have to self-isolate for two weeks. However, the government has announced a list of countries where the travellers are exempt from isolating.

The Foreign Office is also changing its advice against all but essential travel to a number of countries from Saturday.

The quarantine restrictions came into force in early June, to try to prevent coronavirus being brought in at a time when infections in the UK were falling.

The new exemptions mean people arriving from selected destinations will be able to enter England without needing to self-isolate unless they have been in or transited through non-exempt countries in the preceding 14 days. These routes are known as ‘travel corridors’.

Some of those on the list include popular short-haul destinations such as Turkey and Cyprus, as well as long-haul locations including Australia, Barbados, Hong Kong, Japan, New Zealand and Vietnam.

However, the announcement did not guarantee reciprocal arrangements with foreign countries – meaning travellers from the UK may have to self-isolate on arrival there.

The Department for Transport (DfT) added the devolved administrations “will set out their own approach to exemptions” and passengers returning to Scotland, Wales and Northern Ireland “should ensure they follow the laws and guidance which applies there”.

Last week the Scottish government said it had not yet made a final decision on easing restrictions on international travel.

The Welsh government is also yet to decide whether it will follow England in relaxing restrictions. In Northern Ireland, quarantine regulations remain in place for travellers arriving from outside the UK and the Republic of Ireland.

The confirmation of the first four countries to be exempt in England follows weeks of speculation over how the quarantine rules could be relaxed or if Quarantine is abolished.

Last weekend the government said a traffic light system would be introduced, with countries classified as green, amber or red, depending on the prevalence of coronavirus.

Ministers have been under pressure to ease quarantine measures because of the impact on the travel industry, and a number of holiday companies and airlines had been urging the government to drop the arrangement.

The DFT said a risk assessment had been conducted by the Joint Biosecurity Centre, in close consultation with Public Health England and the chief medical officer.

It considered factors including the prevalence of the virus, the numbers of new cases and the potential trajectory of the disease in that destination, the department said.

Portugal is not exempt

The list of countries exempt from quarantine was published on Friday. And Portugal was not on the list, much to the fury of the Portuguese foreign minister.

Portugal’s foreign affairs minister has said his country’s exclusion from a list of countries for which quarantine will not apply for people returning to England is “absurd”.

Other countries excluded from the list, which comes into effect on 10 July, include the US, China, the Maldives and Sweden.

The Portuguese Prime Minister, António Costa, tweeted comparing the UK’s number of coronavirus cases with that of the Algarve, saying: “You are welcome to spend a safe holiday in the Algarve.”

Which is the safest place to stay?
You are welcome to spend a safe holiday in Algarve!#UK #visitportugal pic.twitter.com/2xZzddlzVy

Some of those on the list include popular short-haul destinations such as Turkey and Cyprus, as well as long-haul locations including Australia, Barbados, Hong Kong, Japan, New Zealand and Vietnam.

However, some countries will require visitors to isolate on arrival or will bar them from entering at all.

The quarantine rules will also remain in place in Northern Ireland for visitors arriving from outside of the UK and Republic of Ireland.