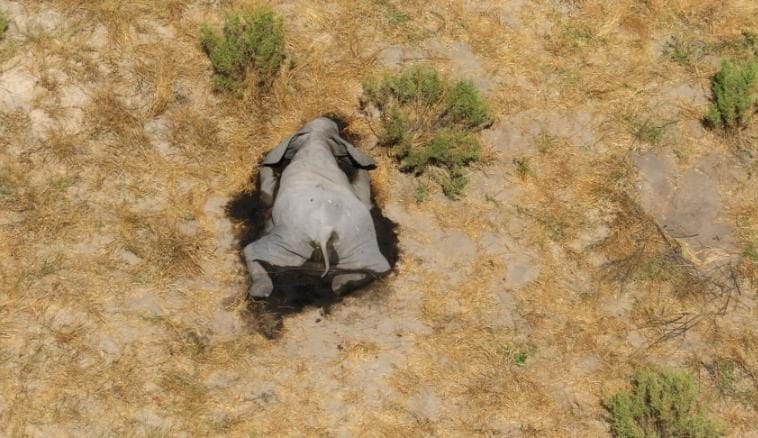 More than 360 elephants found dead in mysterious circumstances in Botswana in the past three months, according to local conservationists.

Live elephants seen nearby appeared physically weak, and one was walking in circles, unable to change direction, observers said. Other species in the area did not appear to have been affected by whatever struck down the elephants.
The unusual number of elephant carcasses were first recorded at the start of May.

No one knows why the animals are dying, with lab results on samples still weeks away, according to the government.

Botswana is home to a third of Africa’s declining elephant population.

Approximately, 130,000 African elephants live in Botswana, more than any other country on the continent. The Okavango Delta, where the carcasses were found, is home to around 10% of the country’s elephants.
Some carcasses were found clustered around waterholes, while others appeared to have died “falling flat on their faces,” according to Niall McCann, director of conservation at United Kingdom charity National Park Rescue.
The Botswana government is testing samples from the dead elephants but is yet to determine a cause of death.
Botswana may be their last place of refuge on the continent, but poachers are already breaching its vast borders in their pursuit of ivory. In seven years, 30% of Africa’s elephants have disappeared. At the current rate of decline, half the continent’s remaining pachyderms will be gone in just nine years.
…………………………………………………