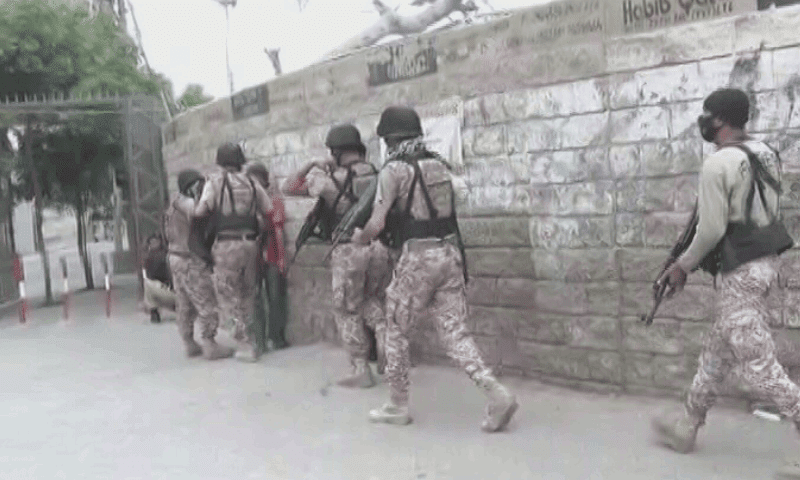 The terrorist attack on the #Karachi Stock Exchange was another example of #India trying to destabilize #Pakistan.

Pakistan’s Foreign Office released a statement saying that the terrorist attack on Karachi Stock Exchange (PSX) on Monday was “externally-supported and another manifestation of the state-sponsored terrorism being perpetrated against” Islamabad, by India.

In a statement issued Monday evening, the Foreign Office said the country’s law enforcement agencies successfully foiled the terrorist attack and that all four terrorists involved in the attempted attack were killed in the encounter.

“Four of our valiant law enforcement personnel embraced martyrdom,” the statement added. “The externally-supported cowardly Terrorist attack on Karachi Stock Exchange is another manifestation of the state-sponsored terrorism being perpetrated against Pakistan, which is highly condemnable.”

In addition, the Foreign Office went on to explain how the country has been persistently apprising and sensitising the global fraternity about threats from India and its Narendra Modi-led BJP government “to use terrorism as a tool to destabilise Pakistan”. Modi has been in currently facing off with China with a border dispute, where 20 Indian soldiers were beaten by Chinese soldiers.

Banned separatist group the Balochistan Liberation Army has claimed responsibility for the attack and released photographs of the assailants. The group has been linked to India and has been responsible for causing various attacks on Pakistani soil.

In the past according to the foreign office statement “Pakistan has already shared with the international community, incriminating evidence about the Indian Intelligence Agency RAW’s involvement in terrorist activities in Pakistan,”.

A heroic effort by the security personnel in Karachi

At least eight people have died and seven were injured after shots were fired by gunmen at the Pakistan Stock Exchange (PSX) in Karachi on Monday, security officials said.

All four attackers were reportedly killed. A police officer and three security guards were among those confirmed dead, Sharjeel Kharal, deputy inspector general of Police South.

The attackers, armed with grenades and automatic rifles, launched the attack and attempted to enter the PSX compound, which is in a high-security zone that also houses the head offices of several banks.

Security personnel, including police and Rangers, intercepted the attackers and killed all four of them, Sindh Rangers said. A clearance operation was conducted later.

Police said that advanced weaponry, hand grenades and explosive material were recovered from the terrorists’ custody. Officials of the Bomb Disposal Unit also arrived at the scene of the attack and scoured the site, including a “suspected car” parked outside the location of the terrorist attack on the Karachi stock exchange that may have been used by the terrorists, for any explosive material.

“Law enforcement agencies thwarted the attack by killing all four attackers,” he said, adding that the assailants had not entered the building.

I salute our brave police & security personnel who thwarted the condemnable terrorist attack in Karachi on #PakistanStockExchange. pic.twitter.com/WGcM28wzSI

In an additional statement, The Pakistani Foreign minister Shah Mehmood Qureshi said that India was involved in the deadly attack, recalling that he had stated after an attack in Waziristan that New Delhi had activated its “sleeper cells” in the country. The circumstances of today’s attack, if examined, “will lead to the same sleeper cells”, Qureshi added.

“India cannot tolerate peace in Pakistan,” the minister said, adding that India was involved in the attack on Pakistani troops as well.

Special Assistant to the Prime Minister on National Security Dr Moeed Yusuf has also urged the international community to publicly call out and condemn countries that perpetrated terrorism against Pakistan. The terrorist attack on the Karachi Stock Exchange was another example of India trying to destabilize Pakistan.

“There is an established link b/w BLA, an international listed terror org, and India, a state-led by fascist govt that has again perpetrated terrorism in Pakistan through its proxies.”

The Pakistani Stock Exchange is located on Chundrigar Road, where the terrorist attack on the Karachi stock exchange took place, This area is also known as Pakistan’s Wall Street, the city’s main commercial street in a high-security zone close to the State Bank of Pakistan (SBP) and the Central Police Office.

Many offices of private banks, commercial enterprises, and the head office of Karachi Port Trust (KPT) are also in close vicinity.