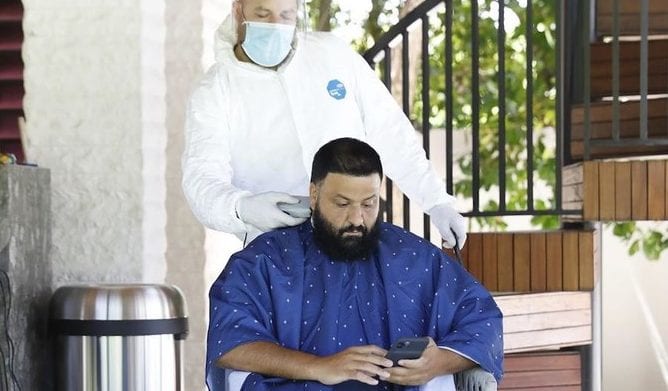 Palestinian music producer, living and working in Hollywood DJ Khaled went viral last week for wearing a full hazmat suit to go to the dentist for a root canal, and this week his barber was dressed in full hazmat gear to give the A list music star a hair cut.

The hitmaker is continuing to take extreme precautions in order to protect himself and others from the coronavirus.

This week, the father-of-two posted a picture of himself getting an at-home haircut on Instagram. To ensure his safety, his barber was wearing a full protective suit, along with a face mask, shield and gloves.

“New norm,” the 44-year-old captioned the photo of his makeshift barbershop.

The post comes shortly after the Grammy award winner was called out by social media users for his scruffy quarantine hair and beard.

The “I’m the One” producer promised fans and critics he will “figure it out soon” — even if that means his barber has to wear a “spacesuit” to ensure proper social distancing amid the crisis. The multi-award-winning producer has a very active Instagram page with over 20 million followers, literally following his every move.

Despite self-isolating at home, the Miami-based artist did his part to help the community by donating medical supplies to frontline health workers, along with his wife, Nicole Tuck.

The HIt music producer has produced some of the biggest hits of the decade and collaborated with multiple award-winning artists including Wild Thoughts is a single produced by the Palestinian-American and performed by Rihanna.

My Tweets
We use cookies to help identify your computer so we can tailor your user experience, track shopping basket contents and remember where you are in the order process. WTX News Our Cookie Policy
Massive explosion in Iranian missile plant – a cyber attack by Israel – VIDEO footage
British Conwoman cons cabin crew in Dubai
To Top
Weekly