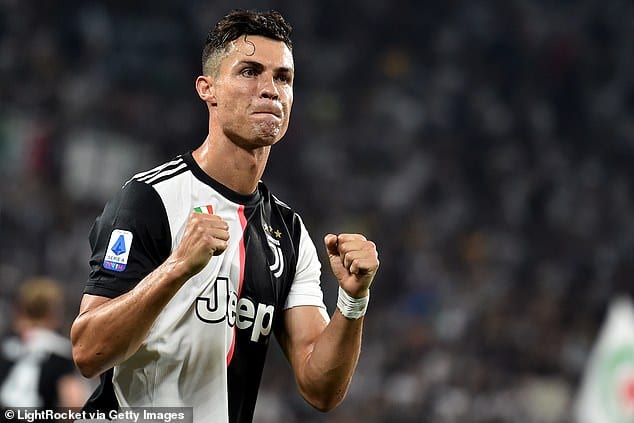 Portuguese superstar Cristiano Ronaldo has become the first footballer to earn more than $1 billion (€885m), according to Forbes magazine.

The Juventus player ranked fourth on the publication’s 2020 Celebrity 100 list after earning $105 million (€92.9m) before taxes and fees in the past year. He beat arch-rival Lionel Messi by one spot with the Argentinian netting $104 million (€92.1m).

Ronaldo, 35, is not the first athlete to cross the $1 billion thresholds while still active, golfer Tiger Woods and boxer Floyd Mayweather beat him to it — but he is the first to reach it in a team sport.

The 34-year-old still has records to break at international level before he hangs up his boots. Ronaldo netted goal number 99 for his beloved Portugal back in November as his nation ran out 2-0 winners of minnows Luxembourg to clinch their place at Euro 2020.

The rest of his income has come from “leveraging his celebrity”, Forbes said.

He’s had a lifetime deal with Nike since 2016 which has so far paid him $20 million (€17.7m) a year, and he also has deals with Clear shampoo, Herbalife and pharmaceutical maker Abbott.

He also has his own trademark, CR7 which includes branded underwear, a line of shoes, fragrances and denim wear. It is estimated to account for a quarter of his annual endorsement income.

The father-of-four is also the most followed athlete on social media with more than 200 million followers on Instagram.

CR7 Denim Spring Summer 20 collection is here. Don’t you think @cristiano is looking great in this short sleeve shirt and skinny jeans?​ Check out the stories to find more about each product.​ ⠀⠀⠀⠀⠀⠀⠀⠀⠀⠀ #STAYSAFE #CR7 #PLAYFECTIONISM​ ⠀⠀⠀⠀⠀⠀⠀⠀⠀⠀ ​

His popularity is also profitable to clubs. Juventus sold 520,000 Ronaldo jerseys worth over $60 million (€53.1m) within 24 hours of its release.

Ronaldo has played for some of the world’s best-known club including Manchester United, Real Madrid and now Juventus.

He has also scoped up five Ballon D’Or and he is the all-time leading goal scorer in the Champions League.