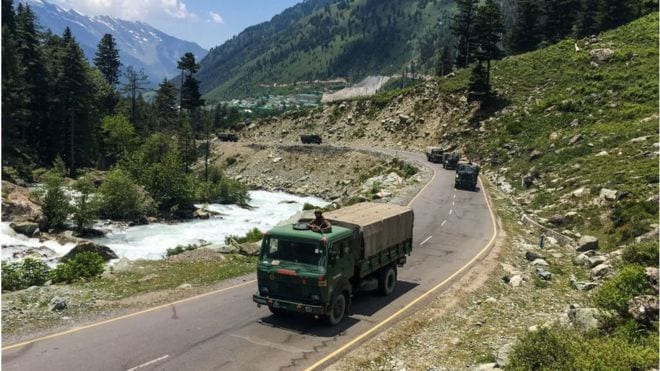 INDIA has rebutted Chinese claims of ownership of the Galwan river valley, the site of a bloody brawl between the neighbours.

India’s foreign ministry said the Chinese claims on the valley were “exaggerated and untenable”.

Meanwhile, an image of a weapon used to attack soldiers during the clash has caused outrage in India.

Both sides have exchanged protests over the clashes in the disputed Himalayan border area.

CHINA has not released casualty figures. Unconfirmed reports in Indian media say at least 40 Chinese soldiers died. Some Indian soldiers are still believed to be missing.

Indian foreign ministry spokesperson Anurag Srivastava said the foreign ministers of both countries had a phone conversation on the developments and “agreed that the overall situation should be handled in a responsible manner”.

“Making exaggerated and untenable claims is contrary to this understanding,” Mr Srivastava said.

An Indian government statement after Subrahmanyam Jaishankar’s conversation with China’s Wang Yi said Beijing tried to erect a structure on the Indian side of the de facto border, the Line of Actual Control (LAC), in the strategically important Galwan Valley.

It described this as “premeditated and planned action that was directly responsible for the resulting violence and casualties” and urged China to “take corrective steps”.

Meanwhile, a Chinese statement quoted Mr Wang as saying: “China again expresses strong protest to India and demands the Indian side launches a thorough investigation… and stop all provocative actions to ensure the same things do not happen again.”

“The sovereignty of the Galwan River Valley has always been ours” says the PLA WTC spokesman. That is complete nonsense, of course. Yet New Delhi is curiously silent. https://t.co/PUsPrJezGT

The Galwan river valley in LADAKH, with its harsh climate and high altitude terrain, lies along the western sector of the LAC and close to Aksai Chin, a disputed area claimed by India but controlled by China.

Media reports said troops clashed on ridges at a height of nearly 14,000 feet along a steep terrain with some soldiers even falling into the fast-flowing 80km-long (50-mile) Galwan river in sub-zero temperatures.

It was the first deadly clash at the disputed border for at least 45 years.

Soldiers reportedly brawled with sticks and bats but no one fired shots.

This is not the first time the two nuclear-armed neighbours have fought without conventional firearms on the border.

India and China have a history of face-offs and overlapping territorial claims along the more than 3,440km (2,100 miles), poorly drawn LAC separating the two sides.