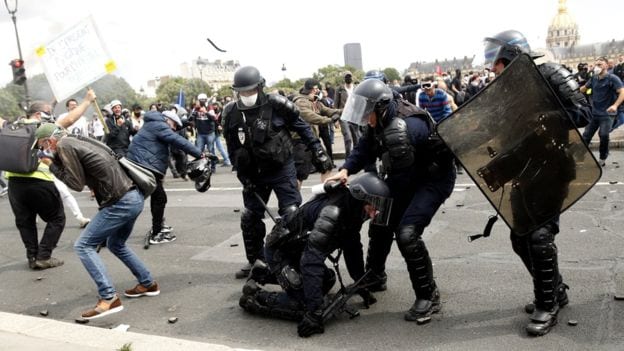 Nationwide demonstrations in France demanding better pay and resources for health workers have been marred by violence in the capital, Paris.

Police fired tear gas to disperse hundreds of masked protesters who threw stones and other projectiles and overturned a car.

Officials said they have 19 officers injured, furthermore, they made more than 30 arrests.

Across France, hospital staff have been demanding government action on pay, recruitment and more beds in hospitals.

Nationwide demonstrations in France demanding better pay and resources for health workers have been marred by violence in the capital, #Paris#France #Macron #protest2020 pic.twitter.com/lTL6kC7wxq

President Emmanuel Macron’s government has announced bonuses for healthcare staff who have worked through the coronavirus crisis.

But unions say the COVID-19 pandemic has exposed weaknesses in the French system and want a major boost in investment.

About 18,000 people attended demonstrations in Paris on Tuesday, police said.

The protest was largely peaceful throughout the day, but was later marred by the actions of a group of up to 300 people, they added.

Police said that the far-left anarchist group known as Black Blocs appeared to carry out much of the violence.

Additionally, Video footage shared on social media showed masked and hooded protesters pushing an overturned car into the middle of a cobbled avenue as others threw objects at riot police.

Earlier, large crowds gathered in parks across the country, before moving through the streets, many waving the French flag.

In France, the number of people confirmed to have died from CORONAVIRUS infection reached 29,439 on Tuesday, according to data compiled by Johns Hopkins University.