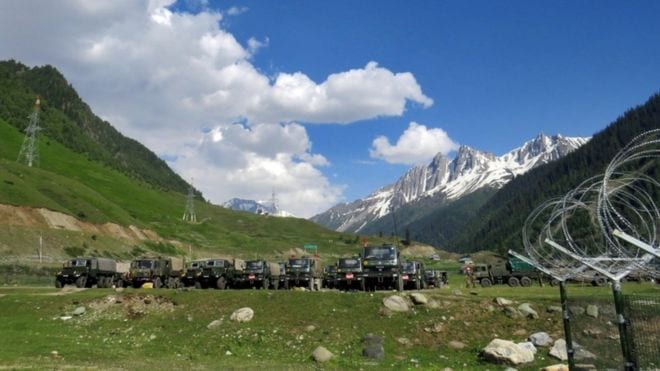 INDIA impatiently awaited Prime Minister Narendra Modi’s response on Wednesday to the death of at least 20 soldiers in a border clash with Chinese troops as the country’s media vented its fury and political rivals goaded Modi over his silence.

Modi, in a Twitter message, called for an all-party meeting on Friday to discuss the situation but did not make any other comment on the confrontation between the nuclear-armed neighbours.

CHINA said it does not want to see any more clashes on the border with India following Monday’s violence.

Foreign ministry spokesman Zhao Lijian repeated that China was not to be blamed for the clash and said the overall situation at the border was stable and controllable.

It's been 45 years since a soldier lost his life at Indo China border. And we lost 20 lives in the past 24 hours. RIP to all those soldiers. I hope Bhakths realise that no government has let down the soldiers as the Modi government has done. #IndiaChinaFaceOff #WeakestPMModi pic.twitter.com/iG5jeayULw

According to Indian officials, no one fired shots, but they hit soldiers with clubs and stones during a brawl that erupted between the two sides in the remote Galwan Valley, high in the mountains where India’s Ladakh region borders China’s Aksai Chin to the east.

India’s foreign ministry said there had been casualties on both sides, but China has not disclosed any casualties so far.

Narendra Modi, Why the PM is silent?

Modi, who rode to power on a nationalist platform, met his defence and foreign ministers and the military chiefs late on Tuesday, but he had yet to speak publicly on the worst clash between the two countries since 1967, five years after China had humiliated India in a war.

People elected Modi to a second five-year term in May 2019 following a campaign focused on national security after spiralling tensions with old enemy Pakistan, on India’s western border.

Facing what could his greatest foreign policy challenge since coming to power in 2014, Modi refrained from commenting publicly on the incident as a clamour for action rose over the past day.

“Why is the PM silent, why is he hiding,” Rahul Gandhi, leader of the opposition Congress party tweeted. “Enough is enough, We need to know what happened. How dare China kill our soldiers, how dare they take our land.”

Why is the PM silent?
Why is he hiding?

Enough is enough. We need to know what has happened.

How dare China kill our soldiers?
How dare they take our land?

Hundreds of Indian and Chinese troops have been facing each other since early May at three or four locations in the uninhabited high-altitude deserts of Ladakh.

India says Chinese troops have intruded into its side of the Line of Actual Control or the de facto border.

China rejects the allegation and has asked India not to build roads in the area, claiming it to be its territory.

Clashes between India and China

There are several reasons why tensions are rising again now – but competing strategic goals lie at the root, and both sides blame each other.

India has built a new road in what experts say is the most remote and vulnerable area along the LAC in Ladakh. And India’s decision to ramp up infrastructure seems to have infuriated Beijing.

Following the latest clash between the two countries, the United Nations urged both sides “to exercise maximum restraint”.

“We take positive note of reports that the two countries have engaged to de-escalate the situation,” UN associate spokesperson Eri Kaneko said.

A US State Department spokesman, meanwhile, said it was “closely monitoring” the situation and that the US supports a peaceful resolution.

My Tweets
We use cookies to help identify your computer so we can tailor your user experience, track shopping basket contents and remember where you are in the order process. WTX News Our Cookie Policy
Daily News Briefing: UK expert finds cheap, life-saving coronavirus drug – ‘major breakthrough’
Oman records 810 further infections, 342 foreign residents
To Top
Weekly