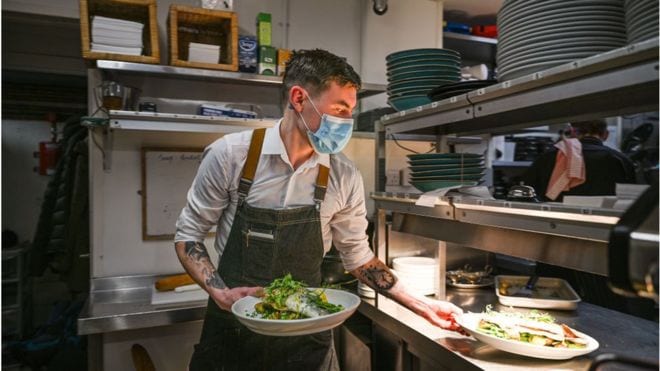 The number of workers on UK payrolls dived more than 600,000 between March and May, official figures suggest.

Meanwhile, the number of people claiming work-related benefits – which includes the unemployed – was up 126% to 2.8 million. The early estimates reflect the impact of around six weeks of lockdown in which large parts of the UK were shut.

But economists say the full effect on employment will not be felt until wage support schemes end in October.

More than 600,000 UK Workers will lose their jobs amid lockdown. Unprecedented times call for unprecedented action.

We need a Universal Basic Minimum Income now. The alternative to UBI is homelessness, a welfare system unable to cope, a mental health crisis, and untold misery.

“The slowdown in the economy is now visibly hitting the labour market, especially in terms of hours worked,” said Jonathan Athow, deputy national statistician for economic statistics at the Office for National Statistics (ONS).

“Early indicators for May show that the number of employees on payrolls were down over 600,000 compared with March.”

Overall, the UK unemployment rate held steady at 3.9% in the three months to April as massive wage support schemes brought in by the government prevented job losses.

Reflecting this, the ONS said the total number of weekly hours worked in the period had dropped to 959.9 million – down by a record 94.2 million, or 9%, on the previous year.

Bigger unemployment rises on the way, UK workers at risk

The figures come after large parts of the economy were shut down to fight CORONAVIRUS.

More than 600,000 UK workers lose their jobs because of the gov's disastrous #Lockdown policies for Bill Gates & Big Pharma profitshttps://t.co/qkC4WVNrpF

The #Lockdown will kill more people than the virus due to poverty, suicide, drug addiction & lack of medical care etc. pic.twitter.com/iU0ozElys9

“It was abundantly clear in every other indicator [other than the headline unemployment rate] that the labour market has weakened dramatically,” she said.

Tej Parikh, the chief economist at the Institute of Directors, agreed: “The furlough scheme continues to hold off the bulk of job losses, but unemployment is likely to surge in the months ahead.”