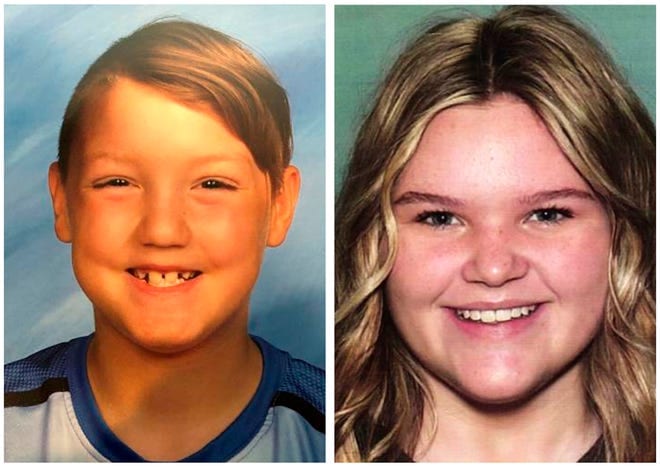 The strange case of the two missing children from Idaho has had a major update after police found what they believe to be human remains.

Joshua “JJ” Vallow, who was seven when he disappeared and his sister Tylee Ryan, 17, have not been seen since September 2019.

The remains were found by investigating officers at the home of Mrs Daybell’s current husband, Chad Daybell, but have not yet been identified.

Remains have been found on Chad Daybell’s property

Chad Daybell is an author of several apocalyptic novels loosely based on Mormon religious teachings, and the couple is involved in a group that promotes preparing for the apocalypse. The group, Preparing A People, has denied being a cult.

There have also been three other suspicious deaths linked to the case of the missing children.

The mother, Lori Daybell moved to Idaho from Arizona in late August 2019 after her then-husband, Charles Vallow, was shot dead by her brother, Alex Cox.

Alex Cox said the shooting was an act of self-defence. Cox died in December of unknown causes.

Their mother gave police misleading answers and outright lies when questioned about the children’s whereabouts and existence, according to authorities. She skipped town the next day following the welfare checkup.

Authorities later found clothes and toys that they believe belong to the children in a nearby storage unit.

‘Infatuation, obsession and the July 2020 apocalypse’

According to divorce documents filed by her late husband, Mrs Daybell believes she is “a god assigned to carry out the work of 144,000 at Christ’s second coming in July 2020.”

She had allegedly threatened to kill him if he got in her way, claiming she had “an angel there to help her dispose of the body.” He took out a protection order following the threat.

He described her as “infatuated and, at times, obsessive about near-death experiences and spiritual visions” and said she reduced to see a therapist because “they would discover that she is a translated being.”

Tammy Daybell reportedly died of natural causes, but police ordered that her body be exhumed after Chad Daybell’s quick remarriage.

Lori Daybell was arrested in Hawaii on charges including child abandonment and contempt of court in February, after missing a January deadline to deliver her children to authorities.

My Tweets
We use cookies to help identify your computer so we can tailor your user experience, track shopping basket contents and remember where you are in the order process. WTX News Our Cookie Policy
Daily News Briefing: WHO says pandemic is ‘far from over’ as daily cases hit a record high
US Consulate in Wuhan to reopen, facing disgruntled Chinese backlash
To Top
Weekly