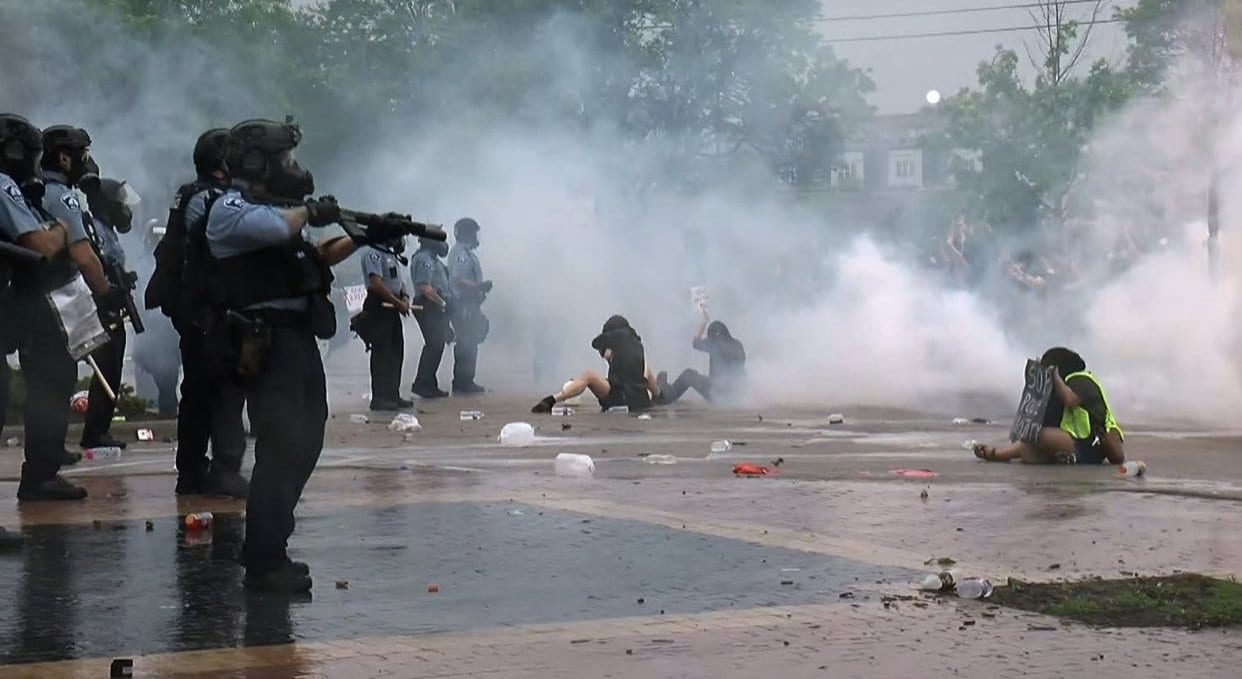 US President Donald Trump took to Twitter to lash out at those protesting in Minneapolis over the cruel death of an unarmed black man, calling those involved in the street clashes “thugs.”

Trump said he would not “stand back and watch this happen to a great American city” adding he told the Minnesota governor “the military is with him all the way.”

“Any difficulty and we will assume control but, when the looting starts the shooting starts,” Trump warned. Twitter later added a message to the tweets saying it “violated the Twitter Rules about glorifying violence.”

….These THUGS are dishonoring the memory of George Floyd, and I won’t let that happen. Just spoke to Governor Tim Walz and told him that the Military is with him all the way. Any difficulty and we will assume control but, when the looting starts, the shooting starts. Thank you!

Protests have kicked off all around the US since the death of George Floyd. They are calling for criminal charges to be brought against four police officers who were involved in the arrest of 46-year-old.

A video of Mr Floyd’s arrest shows him handcuffed and on the ground with one officer with his knee on Mr Floyd’s neck for eight minutes. George Floyd repeatedly tells the officer “I can’t breathe” All four officers have been fired, but not arrested.

My heart is breaking, I’ve never sobbed this hard in my life. I hope the police officer gets what he deserves, I’m so angry.pic.twitter.com/3qFSVM8gy0#JusticeForGeorgeFloyd #BlackLivesMatter #GeorgeFloyd

Earlier on Thursday night, protesters torched a police station in Minneapolis after it was abandoned by the retreating force, while violent clashes have spread to the twin city of St Paul.

BREAKING NEWS: Massive fire at a Walmart in #Minneapolis amid riots. Multiple police stations are burning as 5 precincts have been abandoned.#minneapolisriots #GeorgeFloyd #MinneapolisRiot pic.twitter.com/JNfVl9bwyC

In downtown Phoenix, hundreds peacefully protesting the death of George Floyd after a white police officer knelt on the black man’s neck until he passed out in Minneapolis.

Floyd was pleading for his life.

My Tweets
We use cookies to help identify your computer so we can tailor your user experience, track shopping basket contents and remember where you are in the order process. WTX News Our Cookie Policy
Daily News Briefing: Infection fear doesn’t stop migrants heading for Europe
US sends in National Guard as Minneapolis turns into a warzone
To Top
Weekly