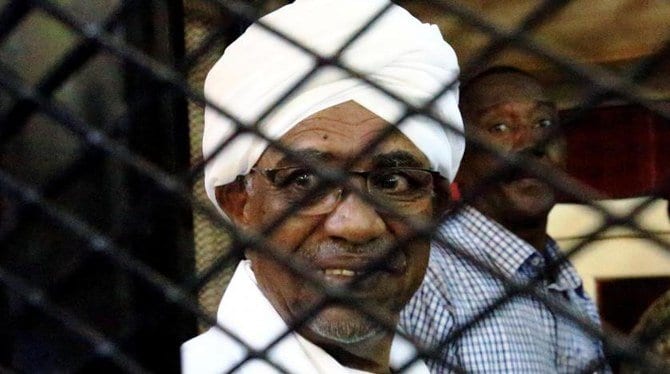 At least three jailed senior members of the toppled regime of former Sudanese leader Omar al-Bashir have the Coronavirus.

The Arab African country has reported 4,146 coronavirus cases and 184 deaths.

It released more than 4,000 prisoners in March as a precaution against the spread of the disease in jails.

But political sensitivities mean all those jailed for an offence committed as part of the administration run by the veteran Islamist, who was ousted in an uprising a year ago, remain in custody.

They include Ahmed Haroun and Abdel Raheem Muhammad Hussein.

They are both wanted by the International Criminal Court (ICC) for alleged crimes in Sudan’s Darfur region.

The prosecution service said they had tested positive for coronavirus.

Haroun was a senior Bashir aide while Hussein served as defence and interior minister.

All three are under health quarantine in Khartoum hospitals.

Bashir, scores of politicians close to him and members of his family, were detained after the uprising on various charges including corruption and violence.

COVID-19 tests on two other detainees including Ali al-Bashir, a brother of the former president, came back negative.

But they were quarantined as a precautionary measure.

Tests results are still awaited on two other suspected cases.

All other detained members of the former regime had refused to be tested for coronavirus.

This month, Sudan, which has a poor health system, extended a lockdown of the state of Khartoum by two weeks to slow the spread of the virus.

My Tweets
We use cookies to help identify your computer so we can tailor your user experience, track shopping basket contents and remember where you are in the order process. WTX News Our Cookie Policy
Coronavirus deaths in US top 100,000
Woes in Lebanon worsen as country pushed to the brink
To Top
Weekly