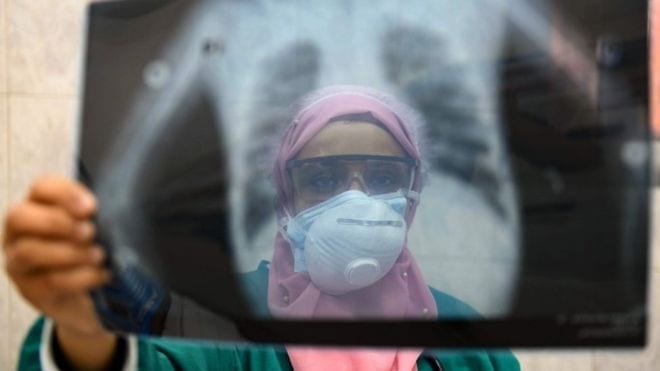 Egypt’s top medical union on Monday warned of a “complete collapse” of the country’s health system. it accused the health ministry of negligence in failing to protect healthcare workers from Coronavirus.

COVID-19 has killed 19 doctors and infected more than 350, according to the EMS, a body representing thousands of Egyptian doctors.

“The EMS holds the health ministry entirely responsible for the mounting deaths and infections among doctors due to its negligence… that is tantamount to death through dereliction of duty,” it added.

Egypt, the most populous country in the Arab world, has so far reported 17,967 confirmed cases of Covid-19 and 783 associated deaths.

The EMS called on the “executive, judicial and legislative” branches of government to force the health ministry to comply with its demands.

These included providing all doctors with personal protective equipment (PPE), training for dealing with coronavirus cases and testing for those with symptoms or who have come into contact with infected people.

The EMS statement came after 32-year-old doctor Walid Yehia died on Saturday after being unable to secure a bed in an isolation hospital.

“His colleagues and I were with him, appealing for help, but there was zero response,” Dr Yehia’s brother was quoted as saying.

A colleague resigned in protest from the same Cairo hospital where Yehia worked.

In a widely shared online post, the co-worker blamed the health ministry for not treating Yehia as soon as he showed symptoms of the virus.

It's a bad decade to be a doctor in egypt ..

In recent weeks Egypt has sent medical aid to countries including China Italy and the United States, angering many medical professionals, who complain about the lack of PPE domestically.

“The health ministry has an obligation towards doctors and all medics who are sacrificing their lives on the front lines to defend the safety of the homeland,” the EMS said.

“It is imperative to provide them with the necessary protection and rapid medical intervention for those who contract the disease”.

It warned that “the health system could completely collapse, leading to a catastrophe affecting the entire country if the health ministry’s negligence and lack of action towards medical staff are not rectified”.

In response, Health Minister Hala Zayed said that since the start of the outbreak, the ministry had “ensured the allocation of a floor in every quarantine hospital with a 20-bed capacity to treat those infected among medical staff”.

Ms Zayed also stated that 11 doctors had so far died, rather than 19.

Social media users contrasted Dr Yehia’s treatment to that given to the actress Ragaa al-Gadawy.

The 81-year-old was tested quickly for the virus and admitted to a quarantine hospital in the city of Ismailiya based on the personal recommendation of the health minister, news websites quoted her daughter Amira Mokhtar as saying.

Ms Zayed has reportedly ordered an investigation into the death of Dr Yehia and promised to take “all legal measures in case of any shortcomings”.