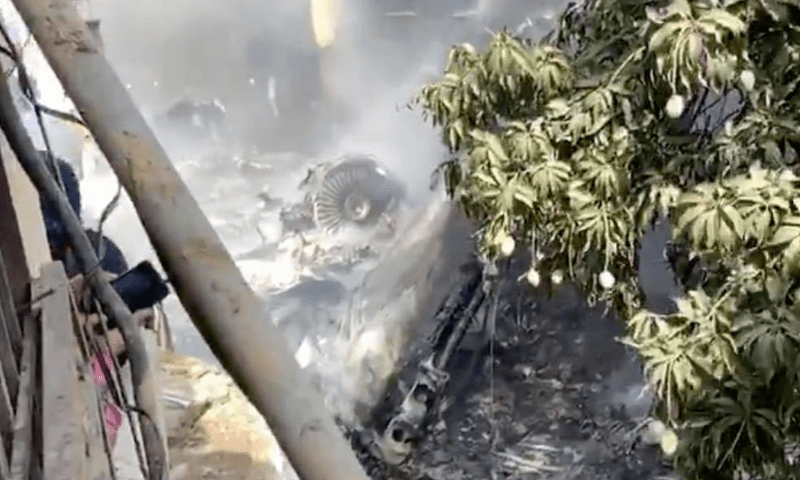 A PIA plane has crashed in Karachi on a flight from Lahore and eyewitness videos show the plane was on fire as it was going down.

A Pakistan International Airlines plane has crashed in Karachi on a flight from Lahore and eyewitness videos show the plane was on fire as it was going down.

The plane, which was reportedly carrying around 99 passengers and eight crew, was flying from Lahore to Jinnah International Airport, one of Pakistan’s busiest airports.

Emergency services have arrived at the scene, where homes have been damaged and the debris from the passenger plane crashed.

“The plane crashed in Karachi. We are trying to confirm the number of passengers but initially, it is 99 passengers and eight crew members,” said Abdul Sattar Khokhar, the spokesman for Pakistan’s aviation authority.

The plane was about to land when it crashed near Model Colony, a neighbourhood of Karachi about 3.2km (two miles) north-east of Jinnah International Airport.

PIA’s Lahore-Karachi flight PK-8303 crashed on a residential area near Karachi airport a short while ago. Fire fighters trying to control fire in an affected house👇🏼 🔥 ✈️ #planecrash #BREAKING pic.twitter.com/LEg1roPjol

According to rescue services, two bodies have been recovered so far.

PIA Chief Executive Officer Air Marshal Arshad Malik, who has left for Karachi, said the pilot told the control room that there was a technical issue and he decided to go around rather than land even though two runways were ready for landing.

Sindh Governor Imran Ismail said the plane fell in a populated area. “The concern now is of casualties of people in the area. Rangers and rescue services have been sent, we are trying to save as many lives as possible.”

Footage showed plumes of smoke rising from the site of the crash within the congested residential area. Ambulances and rescue officials arrived at the scene to help residents. An eyewitness told local media in Pakistan, that the plane was on fire in the air before crashing.

Last Radio conv. of PK8303
"We have lost the engine." #planecrash pic.twitter.com/4nolMdFiMY

Prime Minister Imran Khan said he was “shocked and saddened by the PIA crash”.

“Am in touch with PIA CEO Arshad Malik, who has left for Karachi, and with the rescue and relief teams on the ground as this is the priority right now. The immediate inquiry will be instituted. Prayers and condolences go to families of the deceased,” he said.

The crash comes just days after the country began allowing commercial flights to resume after a coronavirus lockdown.

Pakistanis across the country are preparing to celebrate the end of Ramadan, with many travelling back to their homes in cities and villages.