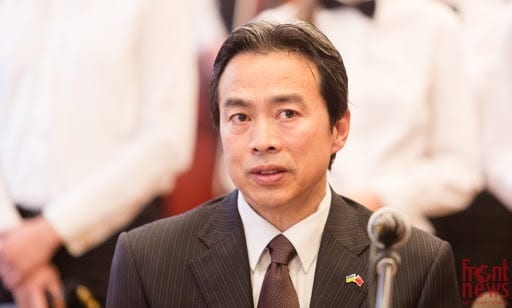 An embassy worker found the body of Du Wei, 57, in his bed in a coastal suburb north of Tel Aviv.

Initial reports say that Du was found dead in his bed by staff at his residence and that no signs of violence were found on his body. The Magen David Adom first aid service said that the cause of death appears to be a cardiac incident.

Just days after Mike Pompeo’s visit to “Israel”, the Chinese ambassador to “Israel” has been found dead. pic.twitter.com/oYLC1EzYgy

Israeli Ministry of Foreign Affairs Director-General Yuval Rotem said that he spoke with China’s deputy ambassador Dai Yuming to express his condolences, and told him that the ministry will help the Chinese Embassy with anything they may need along the way.

On Friday, the Chinese Embassy in Israel responded to criticism voiced by U.S. Secretary of State Mike Pompeo during his visit to Israel last week, calling his remarks that China had concealed information about the outbreak of the coronavirus from the world “absurd.”

The embassy statement noted that “scientists still haven’t identified the origin of COVID-19,” and claimed that China never concealed the outbreak of the disease in the country. It also added that the United States is currently the epicentre of the pandemic.

The embassy also referred to Pompeo’s warning to Israel regarding Chinese investments in the country. During his visit on Wednesday, Pomeo said that such investments could pose a security risk, particularly in the area of infrastructure.

Speaking with Makor Rishon, Du expressed hope to strengthen the ties between Israel and China, addressing the accusations levelled at his country as being the one responsible for the outbreak of the virus.

Netanyahu set to form a government after three Elections in Israel

Iran lockdown: All mosques in Iran to re-open temporarily today

My Tweets
We use cookies to help identify your computer so we can tailor your user experience, track shopping basket contents and remember where you are in the order process. WTX News Our Cookie Policy
Netanyahu set to form government after three Elections in Israel
A United Kingdom being divided by PM Boris Johnson
To Top
%d bloggers like this: