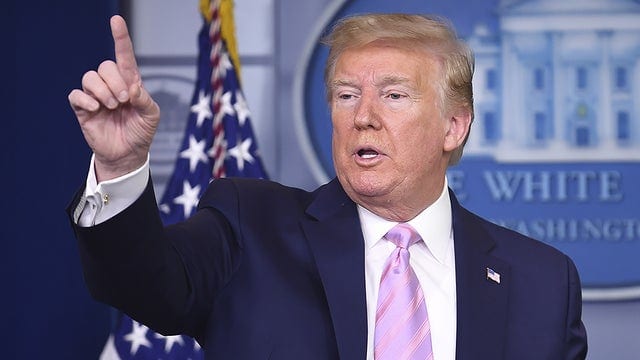 Donald Trump has used a daily White House coronavirus news conference to rant against the US media.

These rallies are affecting his own approval ratings!pic.twitter.com/GmzLu3500B

‘The biggest meltdown from a US president EVER’

One television network described it a “the biggest meltdown from a US president” they’d ever seen.

During his rant, a video produced by White House staff was shown. It included a montage of select clips of State governors praising him for his handling of the crisis.

“You’re a fake, you know you’re a fake,” he argued with one reporter when she asked him what the administration had done to stop the spread of Covid-19 during February. “You’re disgraceful, you’re so disgraceful.”

Rather than paying tribute to the hundreds of Americans who lost their lives over the past 24 hours, the President repeatedly listed what he’d done well.

When challenged, he said the video had been put together in a couple of hours by White House staff and had “hundreds of other statements, better clips” he could have shown.

‘I have the ultimate authority’

Asked what authority he had to re-open the US, as opposed to the power of state governors to decide, Trump, claimed: “I have the ultimate authority.”

But earlier a statement by six eastern US state governors, including New York and New Jersey, who said it was left to them to decide when to lockdown states and it was, therefore, their responsibility when they re-opened.

CNN, who broadcast the news conference live, accused the president of turning the briefing into “a propaganda session” and trying to “rewrite history.”

Multiple news networks decided to cut away from the conference as it was ongoing, saying the president was wrongly using the session to campaign rather than update the nation on the health crisis.