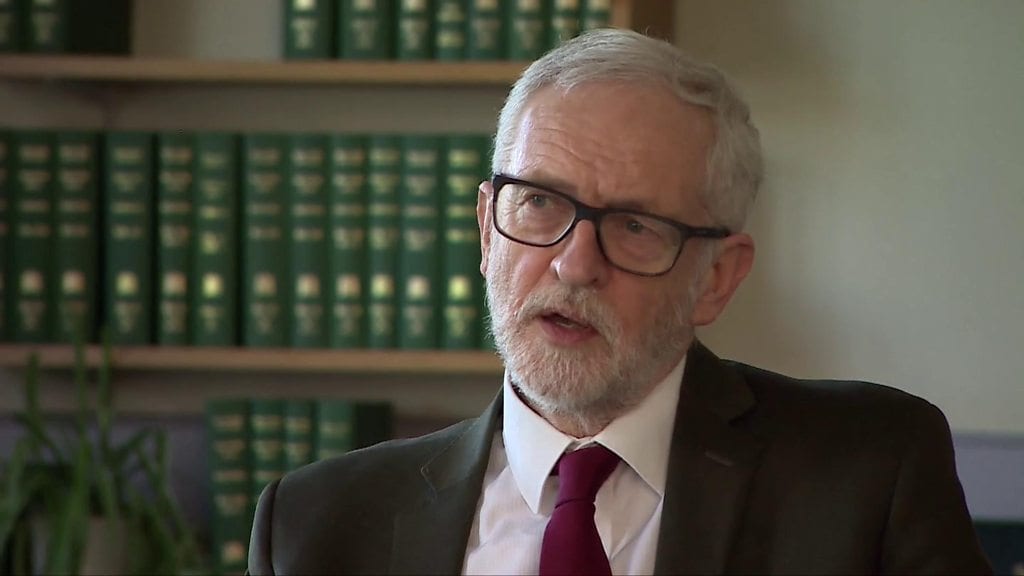 Jeremy Corbyn says the No 10’s response to coronavirus proves he was “absolutely right” about public spending at the 2019 general election.

In an interview with the BBC, he said he had been “denounced as somebody that wanted to spend more money than we could possibly afford” to fix social wrongs.

Jeremy Corbyn by far is the most inspirational politician in my lifetime. Watching him yesterday in his last PM question time brought tears to my eyes. In this crisis Jeremy could have been the right PM at the right time. The electorate will live to regret their choice.

But the amount the government is now spending on the coronavirus crisis shows the Tories now realise they had to “invest in the state.”

The Labour leader said that the country had been “ill-prepared” for the pandemic because of “10 years of austerity, of underfunding the National Health Service and underfunding our benefits system.”

He said the government had been “shocked” by the national emergency, as their “instincts” were for “free-market economics and the small state.”

“They’ve now suddenly [realised] that they have to spend money to invest in the state, as we have always said as a party, and they have come around to a lot of that position.”

‘One of the greatest socialists that ever lived’

‘Nothing will be the same again’

Corbyn said No 10 failed to realise how much of the UK is in “insecure” employment when they drew up their emergency response plan.

And believes the pandemic has changed the political landscape forever.

“I think our society and our politics will never be the same again because we have suddenly realised as a society and a community, we need everybody – and everybody has a contribution to make.”

In just over a week Jeremy Corbyn will be out as the Labour leader, after a four-and-half year run.

He said: “I did everything I possibly could to win both elections and to say to the people of this country, the only way our society can come together is if we’re prepared to invest.

“I was denounced as somebody that wanted to spend more money than we could possibly afford, in order to write the social wrongs of this country.

“I didn’t think that it would take only three months for me to be proved absolutely right by the amount of money that the government is now prepared to put in – and Parliament has just voted through – to deal with the coronavirus crisis.

“So this is a change in our politics, which the coronavirus crisis has actually meant in every country in the world.

“There’s suddenly realisation that we’re only as healthy as the safety of our neighbour.”

In Labour’s 2019 election campaign, they promised to increase spending on the NHS and other public services and bring rail, water, electricity and broadband into public ownership.

In the interview with the BBC, Corbyn acknowledged Labour’s divisions over Brexit led to the party’s defeat.

But said: “I did my best to bring people together on the principles that in or out of the EU, we needed to have an investment-led economy, we needed to be anti-austerity.”

When asked about whether his leadership was also to blame, Corbyn pointed out the “unprecedented level of abuse from the mainstream media of me personally,” had to be “factored in.”

He said he was “proud” of the party’s “hugely expanded membership” during his time as leader. And that he was able to move the party towards an “interventionist” economic policy and opposition to austerity as well as its plan for a “green industrial revolution.”

Corbyn said he was “desperately sad” about losing the December general election and acknowledged he made mistakes as the party’s leader.

He advises his successor to “spend time listening to people in all parts of the country, travel as much as you can around the country as I have done.”

And urges the next Labour leader to “recognise the strengths and the good in people, and that we can bring about [a] decent better society in the great traditions of socialism and the Labour Party.”

My Tweets
We use cookies to help identify your computer so we can tailor your user experience, track shopping basket contents and remember where you are in the order process. WTX News Our Cookie Policy
Daily News Briefing: UAE weekend lockdown – Canada warns US not to damage their relationship & US becomes new epicentre
PM Boris Johnson has coronavirus
To Top
Weekly Community