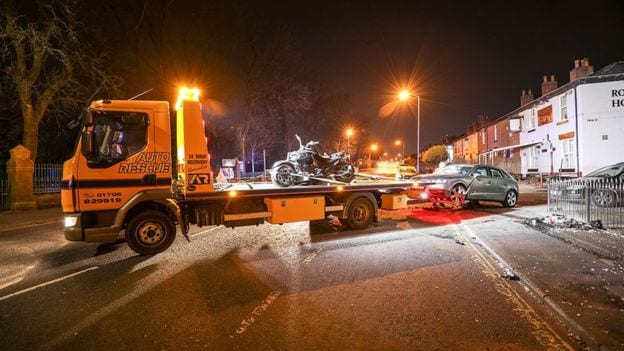 Bugzy Malone is recovering in hospital after being “seriously injured” in a road accident on Wednesday night in Bury.

The rapper’s management confirmed he was involved in the crash in a post on its Instagram story.

“We can confirm that the artist and musician, Aaron Davies (professionally known as Bugzy Malone) was involved in a serious traffic accident yesterday evening. He was seriously injured but is in a stable condition. ”

Bugzy Malone hitting a car at full speed in the last hour or so!
pic.twitter.com/5cGNTPzl5e

Greater Manchester Police told Radio 1 Newsbeat they were called to a collision involving a 29-year-old man.

Bugzy is in a “stable condition” after being taken to hospital with injuries thought not to be life-threatening.

In a statement, Greater Manchester Police said: “Shortly before 9.20pm (GMT) last night (Wednesday 25 March 2020), police were called to Rochdale Road, Bury to reports of a collision involving an Audi car and a quad bike.

“Emergency services attended and the driver of the quad bike – a 29-year-old man – was seriously injured and taken to hospital for treatment.

“His injuries are not believed to be life-threatening.

“No arrests have been made and enquiries are ongoing.”