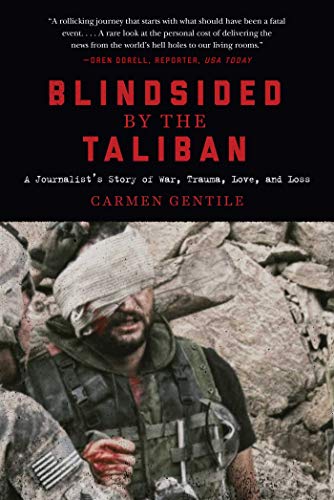 Carmen Gentile is one of those annoying individuals whose cup is always half full and therefore his book Blindsided by the Taliban, he’ll always come up smiling, whatever life throws at him and with a quick quip that will make those around him smile too.

However, he does capture the gallows humour and the hand-to-mouth existence of freelance journalists operating in war and conflict zones.

His book is, without doubt, a fast-paced, page-turner which tells the remarkable story of how he survived against all odds of being hit in the face by an RPG (in civvy street that’s a rocket-propelled grenade.)

Now he swaggers around war zones sporting an eye-patch, mocking his near brush with death but is still deeply wounded by the then absence of his fiancee who was a no show at his sickbay. I’m not going to do any spoiler alerts on that particular little story.

Essentially the book is rammed with adventures, derring-do and anecdotes of being an impecunious freelancer on the frontlines. Gentile’s observational humour is often dark but very funny. even the title is brilliant ‘Blindsided by the Taliban’, I love it!

He was targeted by the Taliban on September 9 back in 2010 while embedded with a US Army unit. (I could’ve told him September is not a great month for journalists in Afghanistan – in 2001 that’s the month I was captured and held hostage for 11 days by the Taliban!)

Against unimaginable odds, the RPG fired directly at him failed to explode although it did a hell of a lot of damage on impact which cost him his sight in one eye and half the side of his face.

What follows is, as you’d expect, more gallows humour that wouldn’t be out of place in a MASH script from the hit TV series on the Vietnam war. Gentile’s real battle begins in recovery fighting opiate-induced constipation, a backdrop of drug addiction and full-blown post-traumatic stress.

Although he does sound like an overblown, over-bearing, misogynistic bloke there is an endearing vulnerability in his words and the inborn swagger – is it a protective shield – is often pierced by his own self-deprecating dialogue.

If you want to know what it’s like embedded with the military, either from a war correspondent’s perspective or an ordinary soldier, there’s a rich slice of authenticity available in the book.

And here’s the spoiler alert – on the road to recovery, he heads back into Afghanistan where his eventual conclusions may just come as a surprise to the reader.

If you want entertainment or just a slice of how the news is delivered to you from Afghanistan then this book is for you. If you’re suffering from PTSD or emerging from a war zone then you may find some closure by reading about Gentile’s own harrowing fightback from the abyss.

The book is compelling and an enjoyable read. I’ve not yet met Gentile but look forward to finding out if he’s as irritating as he sounds, however, there is no way I’d venture into a war zone with him … not with our track records!

My Tweets
We use cookies to help identify your computer so we can tailor your user experience, track shopping basket contents and remember where you are in the order process. WTX News Our Cookie Policy
How to use YouTube to Home-School your children
Prince William eyes the throne as Coronavirus at Buckingham Palace
To Top
%d bloggers like this: