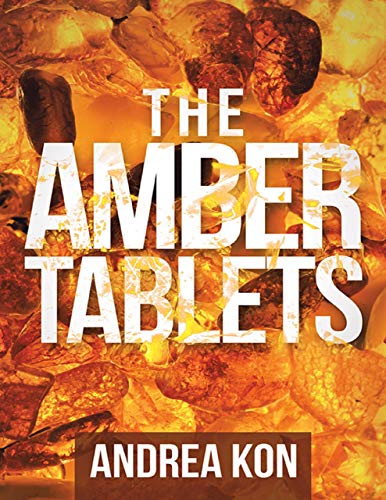 There’s a great deal of pompous invective in the literary world, especially when it comes to self-publishing but The Amber Tablets provides a great antidote to those snooty, high brow critics who refuse to read the work of authors who’ve done it for themselves.

Author Andrea Kon had a great story to tell. Using authentic accounts from her own relatives she began to uncover details of a little known aspect of Jewish persecution in World War Two. After several rejection slips (JK Rowling’ Harry Potter accrued more than a dozen!) Kon decided to turn to self-publishing with her gripping work of historical fiction.

Good for her! Without her determination, this important aspect of the war may have disappeared altogether. While just about everyone is familiar with the horrific details of the Holocaust, her book delves into the persecution of Jews from the uncompromising lens of Russia’s Great Patriotic War.

The book itself is a great page-turner and plunges the reader into a dark and cruel world where the moral compass of peacetime is discarded for those whose basic instinct is one of survival.

Heroes become villains and some characters are purely loathsome and beyond redemption but the moral challenges confronting the main characters are heart-breaking and range from kill or be killed to knowing when to surrender to others in order to save countless victims of Nazi driven persecution.

The book is supposed to be a work of fiction but some of the stories are all the more chilling when you realise the author has drawn upon the true-life accounts given to her by survivors of World War Two and the so-called Russian Patriotic War.

It’s difficult to go into detail without spoiling the plot which keeps you guessing at every turn. The first few pages are explosive and heart-breaking but the following chapters offer little emotional relief with all the twists and turns in the storylines.

Andrea Kon takes the reader through a grim labyrinth of one family’s struggle for survival. It is gripping, page-turning stuff and will undoubtedly make a great film or TV series. If you have the ability to empathise you’ll find the book is both haunting and rewarding. The question you ask yourself at the final page is ‘exactly what would you do to save the lives of innocents or indeed to merely survive?’

By the time the book concludes the central characters are cast across three continents. I’m told there is a sequel coming and, frankly, I can’t wait to see what life throws next at the Karminsky family survivors.