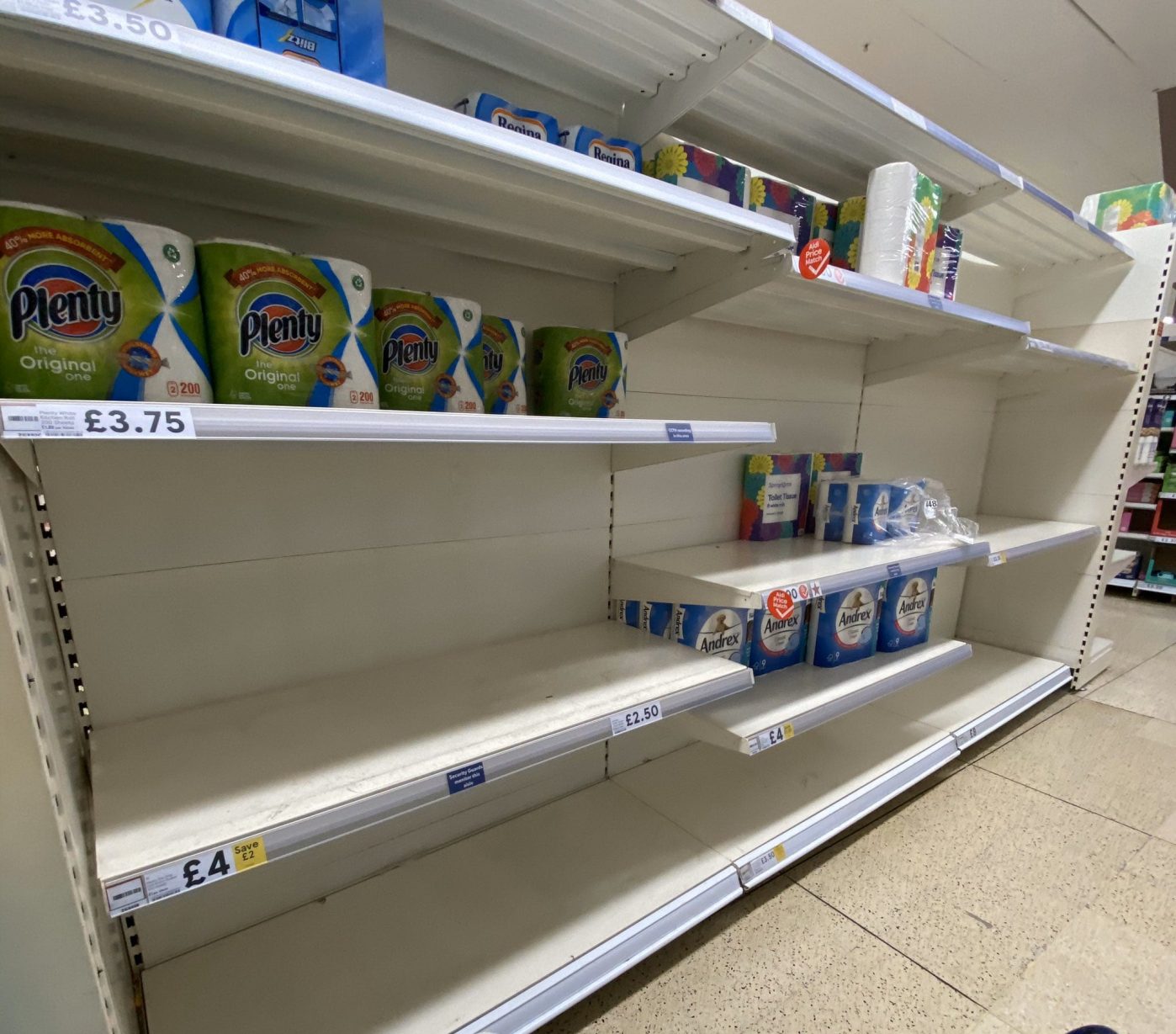 The spreading of the coronavirus and the growing worry about it has reportedly led to UK consumers panic buying.

There is a growing number of reported empty shelves as people rush to stock up on products such as hand sanitiser, toilet papers, pasta and rice.

Supermarkets have reported a spike in demand amid concerns that the coronavirus could lead to shortages. And chemists have had to start rationing the sales of hand sanitizers after stock ran low.

The UK is stocking up

It’s not clear whether the UK is panic-buying just yet, but a survey from Retail Economics says as many as one in 10 UK consumers are stockpiling, based on a sample of 2,000 shoppers.

BBC Radio 4’s PM programme found that one in three people are concerned about having access to enough food if they have to self-isolate.

And social media is full of images and reports of empty shelves.

But most supermarkets aren’t saying if they are experiencing shoppers panic-buying.

Online supermarket Ocado said shopping slots were filled up quicker than normal which they believe is linked to the public’s coronavirus fears.

Ocado said shoppers were placing “particularly large” orders but said there was no shortage of food.

On Thursday, John Lewis said its Waitrose chain was seeing higher demand and was working with suppliers on “an hourly basis” to keep up.

Just been to the shops to see with my own eyes if the toilet roll is all sold out due to panic buying and it is.

Why are people rushing to buy?

On Mumsnet, several people have admitted to panic buying, in case they have to spend two weeks in self-isolation.

“I’m a prepper! It’s all things we’d normally use. Having a few extra, that I’ve been buying for a while, will mean not having to buy it for a while once this blows over,” said one user.

Another said it was other panic-buyers that had convinced her to take action.

“I have to admit, I started buying extra when this first started. Purely because panic-buyers will wipe the shelves (no pun intended!!). Pasta, UHT milk, cereal etc I’ve been ordering extra. If nothing comes of it, I just don’t need to buy it for a while.”

Denys Skirtach, 18, told the BBC his family has been stockpiling on eggs, pasta, rice, toilet paper and canned goods. He plans to stockpile ibuprofen, soap and hand sanitiser.

“We are worried the coronavirus will spread across the UK and supermarkets will be left without any food. We don’t want to run out of the essentials.”

Adding: “We saw on one of the news sites that supermarket shelves were emptying so we thought we’d better stock up.”

“I wouldn’t say we are panicking. We are preparing for the worst-case scenario.”

Should we be worried?

The British Retail Consortium (BRC) said UK supermarkets have “well-rehearsed contingency plans” to deal with events like the coronavirus outbreak and to make sure products are available in stores.

“Come into your local supermarket, and buy your normal weekly shop,” said Andrew Opie, the BRC’s director of food and sustainability.

“If you look at things like toilet paper and dried pasta, in the short-term, if everyone buys an extra packet, that’s going to cause gaps on shelves, because the systems will take a day or two to respond but in very large part, the system will catch up, “ he said.

The government’s chief scientific adviser, Patrick Vallance said there is “absolutely no reason” for panic buying. And said the government has plans for the unlikely event that large numbers of people are quarantined.

But Jan Godsell, professor of operations and supply chain strategy at WMG, University of Warwick, said the worst-case scenario could see an impact on supplies.

“If our workplace is reduced by a fifth [which the government says could happen] then there are likely to be some constraints,” she told the BBC.

If so, she says it would be logical for supermarkets to focus on delivering a narrower range of products and collaborating on things like deliveries to ensure supplies get to where they’re needed.

She says the government need to be more upfront with the public to stop people from panic-buying, as it only makes it worse.

“When people know they’re not being told the truth, they are more likely to panic-buy, so in this situation, honesty is the best policy.”

My Tweets
We use cookies to help identify your computer so we can tailor your user experience, track shopping basket contents and remember where you are in the order process. WTX News Our Cookie Policy
Daily News Briefing: Harry and Meghan return – WHO chief says take virus seriously & 32 dead in Brazil after heavy rains
Meghan slammed on International Women’s Day for making Prince Harry ‘sad’
To Top
Weekly