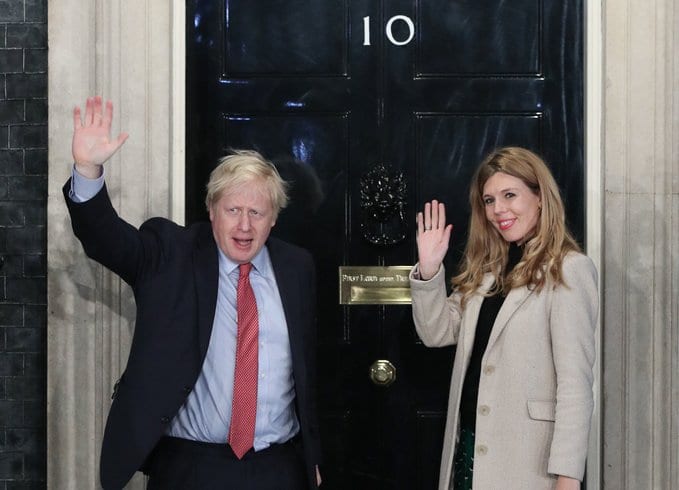 In today’s briefing update, the Sunday papers report on the chaos at number 10 following the resignation of the Home Office’s most senior civil servant. And the news Boris Johnson and his partner are engaged and expecting a baby.

In our special feature, we look into the Harvey Weinstein trial and conviction. And its significance in the #MeToo era.

The Observer leads with Sir Philip Rutnam, the Home Office’s most senior civil servant, has resigned. The paper says it has called into question the future of the Home Secretary Priti Patel after Sir Philip accused her of orchestrating a “vicious” campaign against him. Ms Patel has previously denied mistreating officials.

The Sunday Times also leads with the “chaos” at the Home Office, which it says has left the government “reeling” at a time when the department has a “pivotal role” with its plan for a post-Brexit immigration system. The paper also reports on the PM’s baby and engagement announcement.

The Mail on Sunday’s front splash features the Home Office row and Mr Johnson’s personal news. But the paper leads with a “major new Whitehall storm”. The Mail has seen leaked emails by a senior government adviser who says agriculture and fishery production “certainly isn’t” critically important to the UK economy. The remarks from the adviser – who is a colleague of the PM’s strategist Dominic Cummings – are “astonishing”, the paper says.

No 10 wedding and a baby too

The Sunday Telegraph leads with the engagement and pregnancy news from Boris Johnson and Carrie Symonds. The names Charlotte, James and Winston are said to be the bookies’ favourites for the baby, according to the paper. Mr Johnson will be the first PM to marry in office in nearly 200 years.

Baby joy for Boris and Carrie

The Sunday Express also leads with news of the PM’s “baby joy”. The paper says the announcement ends “weeks of speculation.” Also on the front page is the latest on the government’s plans to resist the spread of coronavirus in the UK. The government is setting up a “war room” to battle the virus, the paper says.

Mo: I’ve nothing to hide on doping claim

The Sunday Mirror has spoken to four-time Olympic champion Sir Mo Farah after the World Anti-Doping Agency said it would investigate all athletes who trained with Alberto Salazar – Mo’s banned former coach. Sir Mo said he has “nothing to hide” and denied cheating. He is not accused of breaking anti-doping rules.

‘Massacres’ being committed against Muslims in India

Today, the remnants of Storm Jorge will still bring gusty winds to northern areas. Northern Scotland will see showery rain with hill snow. Showers elsewhere, but drier and brighter towards the east.

Rain in Scotland will push further north, followed by showers, wintry on hills. Drier with clear spells elsewhere, although southern Britain may see some rain near dawn. Chilly but with winds easing.

They are starting to get more and more desperate...
This shows that we’re winning. https://t.co/NLOZL331X9

One of Hollywood's most successful movie producers now convicted of sexual assualt and rape.

In today’s special feature we look at the Harvey Weinstein trial, conviction and what it means for the #MeToo era.

His conviction for sexual assault and rape is being hailed as a turning point in the #MeToo movement but his attorneys say he never had a chance at a fair trial.

The movie producer was convicted of committing a criminal sex act in the first degree and rape in the third degree. He was acquitted of the more serious charges of predatory sexual assault involving two women and one count of first-degree rape.

“This is a big day. This is a new day,” Manhattan District Attorney Cyrus Vance Jr. said. “This is a new landscape for survivors of sexual assault in America, I believe, and this is a new day. It is a new day because Harvey Weinstein has finally been held accountable for crimes he committed.”

Slate reports Harvey Weinstein has hired a prison consultant. And asks what they do.

After his conviction on Monday, Weinstein is now facing a sentence of five to 25 years in prison. The publication says in fear of this outcome he hired a prison consultant two weeks ago to help him navigate incarceration.

In 2009, Brian Palmer explained what prison consultants do when former New York Giants wide receiver Plaxico Burress hired one before his two-year sentence.

To start they will help Weinstein get into the best prison and orient him on its rules and customs. The first step is finding the right institution for you. The consultant will walk you through where everything is, how to make a good impression, how to make friends etc. Almost like going to university.

After Weinstein’s conviction, he was taken to Bellevue Hospital instead of the notorious Rikers Island jail, after suffering chest pains.

His spokesperson said he was finding his stay at the hospital difficult and is ‘very, very low’. His spokesperson Juda Engelmayer said he spent an hour and a half with Harvey on Friday, telling Reuters: “It’s scaring him. I think he’s melancholy. He’s very, very low right now. He doesn’t like being left alone. When no one’s there, he said he’s just staring at the four walls. He can go stir crazy just staring at the emptiness.”

He is currently under guard in his hospital room. His room is ‘bare’ with just a bed, stainless steel toilet with no seat and large windows.

Weinstein has urged his team to keep fighting for him whilst he awaits possible transfer to Rikers Island.

“When I saw him yesterday, I was not expecting him to be in as good spirits as he was,” said New York defence attorney Arthur Aidala. “He was in pretty good shape — pretty focused on the future, what the next steps are.”

“Obviously, we all wish he was sleeping in his own bed right now, but he appeared to be as healthy as possible, although his vital signs might not have been ideal, but he was trying to motivate me and passing the message along to the rest of the team to keep fighting for him,” he said.

“He’s been consistent from the day I met him about his innocence, and he’s still very forceful in proclaiming that ‘I didn’t sexually assault anyone and I didn’t rape anyone,’” Aidala added.

The Guardian says now Weinstein has been convicted its time to end the cliche line that rape is about power, not sex.

The author says after Weinstein’s conviction the line rape “is about power and not sex” made its appearance amongst the op-eds and commentary. And there are good reasons for its existence and its persistence. Drawing a line between “sex” and “power” was one of the strategies that the women’s movement used in the early 20th century to undermine the patriarchal narrative about rape.

In the he-said, she-said, no longer could he say he did it because he desired her so much (or he didn’t do it because she was too ugly). By making the case that rape was a crime of power, not passion, feminists were able to shift rape trials away from being inquests into the attractions and virtues of the victim.