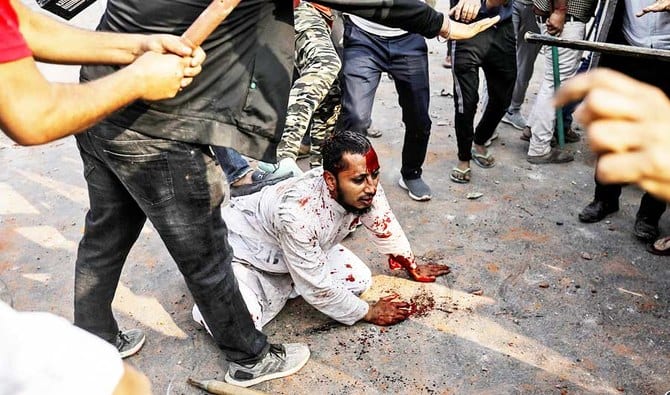 An Indian police officer was among at least five people killed in New Delhi on Monday ahead of Trump’s arrival to India. During violent clashes on the streets of New Delhi protesters took to the streets over the contentious citizenship law, hours before US President Donald Trump arrived in the Indian capital for an official visit.

The Indian citizens took to the streets of New Delhi hours before US President Donald Trump arrived in the Indian capital.

Trump Landed and during his visit to Gujrat said “America loves India, and America respects India” but despite that, the violence continued in parts of India. With clashes between police and protesters.

Prayers for the well being of DCP Amit Sharma & 50 other police personnel’s who are seriously injured in today’s attack by #urbanNaxals in Delhi. #DelhiBurning pic.twitter.com/UH1tUv9JFZ

In India protests have broken out across India since the citizenship law came into force in December, leaving at least 30 people killed in clashes with police. Critics say the law discriminates against Muslims.

Very distressing news regarding disturbance of peace and harmony in parts of Delhi coming in.
I sincerely urge Hon’ble LG n Hon'ble Union Home Minister to restore law and order n ensure that peace and harmony is maintained. Nobody should be allowed to orchestrate flagrations.

The new law has raised worries abroad — including in Washington — that Prime Minister Narendra Modi wants to remould secular India into a Hindu nation while marginalizing the country’s 200 million Muslims, a claim he denies.

INDIA is Under Attack!

In a show of force, Burqa clad female jihadis lined the streets in Mumbai to "protest' the Citizenship Amendment Act (CAA)

A senior US official told reporters that President Donald Trump would raise concerns about religious freedom in the Hindu-majority nation during the trip, calling them “extremely important to this administration”.

The latest unrest erupted between several hundred supporters and opponents of the law in a Muslim-dominated area of northeast Delhi on Sunday and continued Monday.

My Tweets
We use cookies to help identify your computer so we can tailor your user experience, track shopping basket contents and remember where you are in the order process. WTX News Our Cookie Policy
Screen icon Kirk Douglas leaves ‘almost entire $61 million fortune to charity’
Daily News Briefing: Weinstein GUILTY – Floods in Indonesia crippling capital & WHO issues warning of coronavirus pandemic
To Top
Weekly