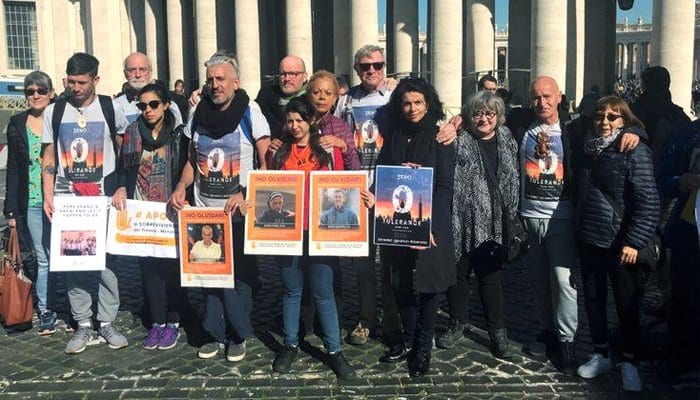 Deaf victims of sexual abuse by Catholic priests at a school for the deaf in Argentina staged a protest at the Vatican in Italy on Friday. To raise awareness for the Deaf survivors of clergy sexual abuse before an upcoming trial of more alleged abusers.

About 20 people, including several former students, held up signs reading “Zero Tolerance,” “Don’t Forget,” and “We Are Not Going Away” in front of the building housing the Vatican’s Congregation for the Doctrine for the Faith, which handles abuse cases. The victims’ lawyers and other victims of abuse were among those who joined the protest.

Survivors of sexual abuse by priests at the Provolo Institute for the Deaf in Argentina hold a banner outside St. Peter’s Square, calling for the Vatican to release documents on their abusers at the school.

I went to Rome to call out the Vatican for their lack of action in dealing with sexual abuse and rape by clergy. I took some time to visit Trevi Fountain. pic.twitter.com/mECLSrm7aV

How many catholic priests have been accused

This trial is for 10 others who worked at the Antonio Provolo Institute for the deaf, including teachers and a nun, are expected to start in a few months. They are accused of abetting the abuse by the priests.

Last November, a court in the province of Mendoza convicted two priests and the former gardener at a Catholic Church-run school on 28 counts of sexual abuse and corruption of minors.

The case in Argentina and a similar one at a school for the deaf in Italy have prompted outrage because of the particular vulnerability of the children and their difficulty in communicating about the crimes.

Three deaf survivors of clerical sexual abuse from Argentine say, they want Pope Francis finally to live up to his promise of reform. They are taking their call directly to the Vatican this week. This survivors confessed, they were tortured, by their abusers but now felt pic.twitter.com/oAovBj21aD

The ECA and several other groups of victims travelled to Rome to mark the first anniversary of a Church summit on sexual abuse at the Vatican.

They say Pope Francis and Vatican officials have not done enough to make bishops and other members of the Catholic Church hierarchy accountable for the cover-up of sexual abuse.

The two priests convicted in last November’s trial were given sentences of 42 and 45 years in prison respectively while the school employee was given 18 years. They are appealing the ruling.

Where does Vatican get money?

St. Peter’s Basilica in Vatican City, which is the largest church in the world.

Deaf survivors of clergy sexual abuse protest in the Vatican

Why did the Vatican have so much power?

The Catholic Church around the world is still struggling to come to grips with the worldwide crisis, most of which involves cases of abuse that happened decades ago. This particular issue involving the Deaf survivors of clergy sexual abuse is the latest in thousands of cases to plague the Vatican’s legacy worldwide.

It has devastated the Church’s credibility and dented its coffers. About two dozen dioceses in the United States alone have filed for bankruptcy because of mounting lawsuits.

A number of US states have also changed statutes of limitations law enabling victims to file for damages for abuse that occurred decades ago.

My Tweets
We use cookies to help identify your computer so we can tailor your user experience, track shopping basket contents and remember where you are in the order process. WTX News Our Cookie Policy
Daily News Briefing: Twitter to flag ‘lies & misinformation’ – MGM resort hack includes Justin Bieber and Jack Dorsey & Grace Millane’s mother confronts killer
Fury destroys Wilder
To Top
Weekly