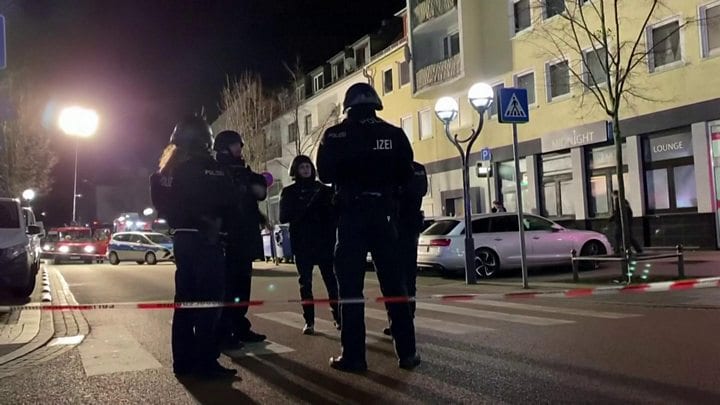 Nine people have been killed in two shootings at shisha bars in the western German city of Hanau, police say.

The attack which started at 22:00 local time on Wednesday left several others seriously injured.

In both locations, the bar attendees were reported to have been predominantly Kurdish.

The suspect was later found dead at his home, along with the body of a second person.

An investigation has been launched and at present, the motive is still unconfirmed. There are reports that the shooter held extreme right-wing views after a confession letter was found at his home.

Bild newspaper has said the suspect was a German citizen with a firearms licence. They reported that ammunition and gun magazines had been found in his car.

Bild newspaper says #Hanau shooting suspect had expressed extreme right-wing views in a letter of confession he left behind https://t.co/L9k7zB9fZG

What do we know about the shootings?

The first attack was at ‘Midnight’ shisha bar in the city centre of Hanau. Witnesses have said they heard about a dozen gunshots and at least three people have died.

The suspect is believed to have fled in a dark car to the Kesselstadt neighbourhood and reportedly opened fire at the ‘Arena Bar & Cafe,’ where five people were killed.

After the shootings, a seven-hour manhunt began. Officers searched for what they thought could have been multiple gunmen.

Hanau Mayor Claus Kaminsky told Bild it had been a “terrible night,” adding: “You could not imagine a worse night. It will, of course, keep us busy for a long, long time and remain a sad memory. I’m deeply moved.”

The death toll was reported to be eight but raised to nine in the early hours of the following morning after one of the wounded victims succumbed to their injuries.