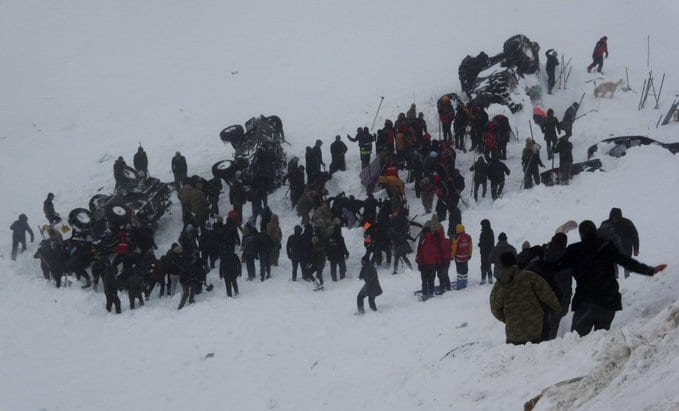 At least Thirty-three people have been killed on a second Turkish avalanche on Wednesday in eastern Turkey. This happened during a search and rescue mission after a similar avalanche the day before.

#Turkey in less than two weeks:

About 300 rescue workers were at the site. The bodies of 14 rescue workers and nine civilians were discovered at the scene in Van province, where they had been helping uncover a minibus buried by an avalanche late Tuesday.

The death toll from the #Bahcesaray avalanches has reached 33.

More than 50 people were believed to be trapped in vehicles in the area following the incident on Wednesday.

Pictures from the scene showed people being carried away on stretchers. Footage also showed dozens of people using shovels in an attempt to reach victims.

Speaking at a ceremony in Turkey’s central Kirikkale province, President Recep Tayyip Erdogan confirmed that at least 33 people had died in the second disaster.

“May they rest in peace,” he said, adding: “Unfortunately, avalanches [and] landslides pose risks.”

The latest figures bring the death toll from the two incidents to 38.

The governor said rescue efforts continued despite the difficult winter conditions causing transport problems, with TV images showing more heavy snow which continued to fall on the mountainside by the Turkish avalanche.

Officials said 30 people had been found alive and taken to hospital.

Local media reported that residents in nearby areas also joined the rescue efforts. Earlier a plane crashed in Istanbul and split in half.

My Tweets
We use cookies to help identify your computer so we can tailor your user experience, track shopping basket contents and remember where you are in the order process. WTX News Our Cookie Policy
Watch Video as Turkish plane has skidded off runway in Istanbul & breaks in half
Daily News Briefing: Race to stop terror convict’s release – Iran’s Khamenei says peace deal will be dead before Trump & Kirk Douglas dies
To Top
Weekly