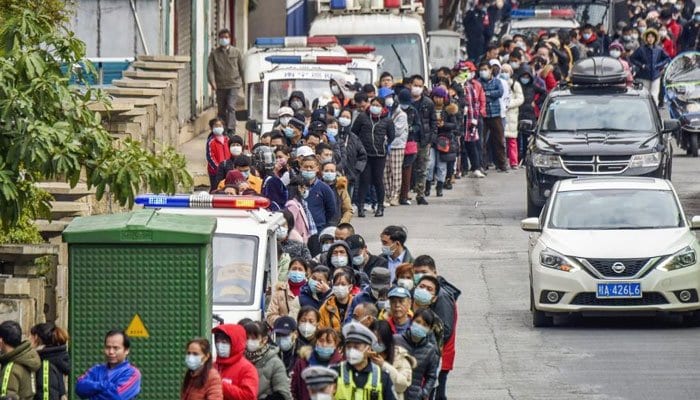 The outbreak from the Coronavirus has had a sudden increase in the death toll which has risen to 425. It is expected to increase daily and hit a thousand mark by the end of the week. Sixty-four new deaths were announced after China recorded its biggest single-day increase in fatalities since the outbreak began late last year.

Sixty-four new deaths were confirmed on Tuesday surpassing Monday’s record of fifty-seven deaths. Which shows the biggest daily increase since the virus was detected late last year in the central city of Wuhan.

The death toll in China stood at 425, exceeding the 349 mainland fatalities from the Severe Acute Respiratory Syndrome (SARS) outbreak of 2002-03, which killed nearly 800 globally.

Wuhan, which has been transformed from a bustling industrial hub into a near-ghost town, residents have been living in deep fear of catching the virus. The city’s medical facilities have been overwhelmed, with Xinhua reporting that 68 medical teams of 8,300 staff had been sent to Hubei.

The total number of confirmed coronavirus cases in China stands at 20,438 as of Tuesday morning, an increase of 3,235 on the previous day — an over 18% jump. The death toll is now at 425 in China, an increase of around 65 from Sunday.

China’s top leadership on Monday admitted “shortcomings and difficulties” in its response to the coronavirus outbreak, as state media said a new hospital built at breakneck pace began receiving patients in the epicentre of the crisis.

The virus has since spread to more than 24 countries, despite many governments imposing unprecedented travel bans on people coming from China.

The World Health Organisation has declared the crisis a global health emergency, and the first death outside China was confirmed in the Philippines on Sunday.

Most of the deaths have been in Wuhan and the rest of surrounding Hubei province, most of which has been under lockdown for almost two weeks.

Late on Monday, the Standing Committee of the Politburo – the country’s top leadership – met in Beijing and acknowledged “shortcomings and difficulties” in China’s response to the outbreak.

“It is necessary to strengthen market supervision, resolutely ban and severely crackdown on illegal wildlife markets and trade,” the Politburo said in a meeting on Monday, Xinhua reported.
The government also said it “urgently” needed protective medical equipment such as surgical masks, protective suits, and safety goggles as it battles to control the outbreak.

Authorities in provinces that are home to more than 300 million people — including Guangdong, the country’s most populous in south China with 113 million people — have ordered everyone to wear masks in public.

But factories capable of producing around 20 million masks a day are only operating at 60-70 per cent of capacity. So Chinese authorities were taking steps to bring in masks from Europe, Japan and the United States, while the foreign ministry said countries including South Korea, Japan, Kazakhstan and Hungary had donated medical supplies.

As the Coronavirus death toll passes 425 it is also having a major impact on the economy curbing the output of Chinese factories.

The Shanghai stock market plunged almost eight per cent Monday on the first day of trading since the holiday as investors played catch-up with last week’s global retreat.

Macau, the world’s biggest gambling hub, has asked casinos to temporarily close to halting the spread of coronavirus. And if China continues to halt the factory production of Foxconn, it will hamper the production of the new iPhone.