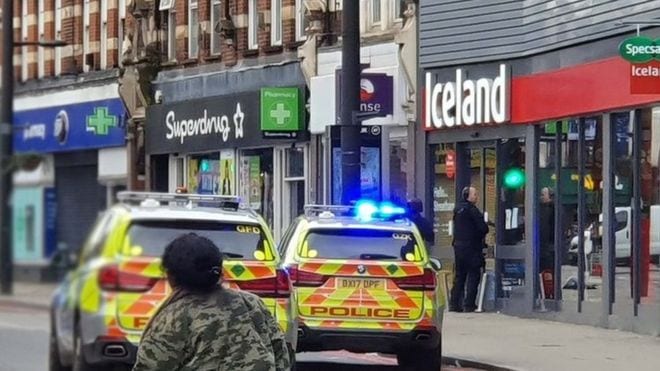 Streatham shooting – Metropolitan Police has shot a man in Stretham on Sunday afternoon, following a “terrorist-related” incident in south London. Several people have been stabbed and the man was shot dead in London – which police have described as a terrorist-related incident.

“At this stage, it is believed a number of people have been stabbed,” said the police at Streatham shooting. “The circumstances are being assessed; the incident has been declared as terrorist-related.”

“The circumstances are being assessed; the incident has been declared as terrorist-related.”

Social media images show a large police presence at the scene, with ambulance and police crews in the area.

Around a dozen armed police are thought to be at the scene and witnesses said two people were being treated for injuries.

Other images show a police officer holding a gun and examining a backpack.

#INCIDENT A man has been shot by armed officers in #Streatham. At this stage it is believed a number of people have been stabbed. The circumstances are being assessed; the incident has been declared as terrorist-related. Please follow @metpoliceuk for updates

Witnesses on social media have said they heard three gunshots fired just after 14:00 BST on Sunday and people were being treated by doctors in a local London hospital.

All gone off in Streathem apparently. Cops have shot someone.

Emergency services, including paramedics, are in attendance. Police urged people to avoid the area as they deal with the incident.

London Ambulance Service said: “We have a number of resources attending an incident in Streatham High Road.”