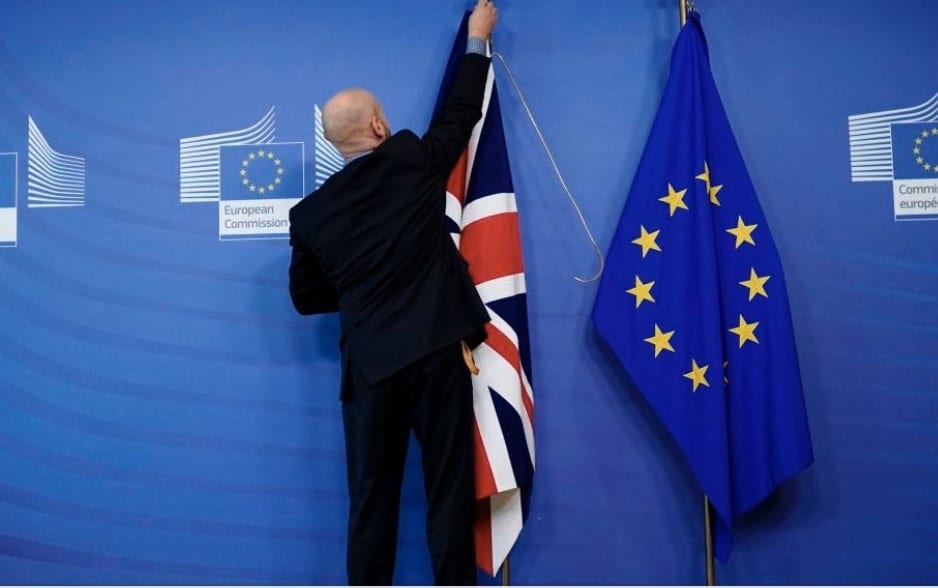 In a historic moment in British history, the United is no longer a member of the European Union.

The United Kingdom left the EU at 11.00 PM ( midnight in EU). 47 years after it joined in 1973 and more than three years after it voted to walk away in the Brexit referendum.  One of the most divisive referendums and one that has split the country, literally, down the middle, even between families. It has dominated the headlines, business news and pub chats up and down the country and has been the focus of British and EU politics for the past three years.

At 23:00 GMT the country was marked by both celebrations and anti-Brexit protests. It was more of a symbolic moment than a sign of real change, as Britain’s 11-month transition period means all the benefits and mechanisms of EU membership still apply.

The Empire Strikes Back

British and EU flags were lowered in Brussels and London while crowds gathered in London, Edinburgh and elsewhere marking the country’s final hours of membership.

Brexit parties were held in pubs and social clubs across the UK as the country counted down to its official departure. Candlelit vigils were held in Scotland, which voted to stay in the EU, while Brexiteers partied in London’s Parliament Square.

Brexit is so bloody stupid. It’s all going to go completely tits up, and everyone who voted for it is going to cry later when the country completely falls apart. The people who sold this idea to you lied, and will be completely protected, and unbothered as your lives go to shit. pic.twitter.com/cNM6vApkgk

In Scotland, where the UK’s departure from the European Union could boost demands for independence, thousands attended a ‘Missing EU Already’ rally.

In Northern Ireland, the campaign group Border Communities Against Brexit staged a series of protests in Armagh, near to the border with the Irish Republic.

At 2300 GMT, Scotland’s First Minister Nicola Sturgeon tweeted a picture of the EU flag, adding: “Scotland will return to the heart of Europe as an independent country – #LeaveALightOnForScotland”.

Not a happy moment for the EU

David Sassoli, the President of the EU parliament, opened the presser saying that that EU “have done everything to make UK citizens understand the gravity of their decision”.

He said that “this day will be marked in history”, while Charles Michel, the head of the EU Council, called it an “exceptional day for the EU”.

“It’s never a happy moment when someone leaves,” Michel continued, reaffirming the bloc’s commitment to “have our relationship with the UK be as close as possible”.

He then focused on the union’s future saying: “we will devote all our energy in building a stronger and more ambitious union”.

What will happen next?

UK citizens will notice a few immediate changes now that the country is no longer in the European Union.

Most EU laws will continue to be in force – including the free movement of people – until 31 December, when the transition period comes to an end.

Today the prime minister marked the historic occasion by hailing as a new era, a bright new dawn, But in reality, we start months of hard bargaining with our EU neighbours English the Channel. And now going forward we will learn the true cost of the Brexit referendum.

So enamoured by Brexit they're willing to go to Downing Street to watch it happen on a big clock. Not able to list a single fucking benefit it'll have on our lives.pic.twitter.com/F3ArK43opQ

In the past 12 months, the EU has always taken a soft approach to the UK, in hope that maybe the UK will ‘change her mind’ but going forward you can expel that courtesy. A tone which has already been set by the

Irish Taoiseach (Prime Minister) Leo Varadkar said that Brexit was a bittersweet moment in EU history and added “I am ambitious about the future EU/UK relationship but I also think we think to be realistic about the dangers. We need to start a new relationship between the EU and the UK on a firm and honest footing. And that means a level playing field.”