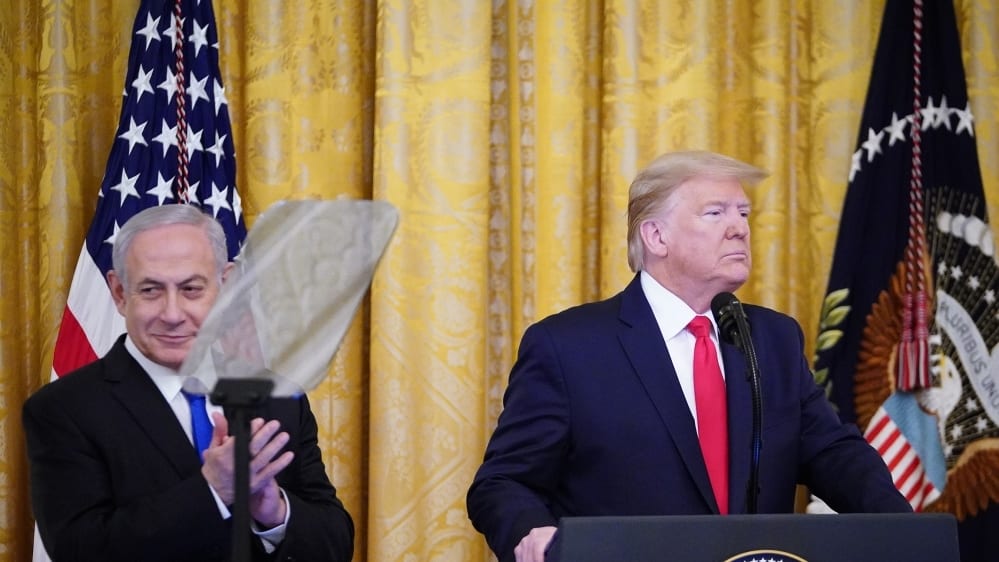 Yesterday US President Donald Trump proposed the potential of the creation of a Palestinian state (143 UN member states recognise its existence) with the capital in East Jerusalem. He claimed it is the deal of the century and as it’s broken down, in reality, it is a glorified bribe, garnished with magic proposals and clever marketing.

It proposes that the Palestinians be given freedoms, development funds and legislative power, in a trade-off for land-dependent on Palestinians taking steps to become self-governing. The very freedoms which have been removed by the Israeli regime, in over 50 years of occupation.

Israel celebrated the deal. The heads of the two main Israeli parties, Benjamin Netanyahu, the leader of the right-wing Likud, and Benny Gantz, the head of the centre-right Kaḥol Lavan, both of whom were invited to the Whitehouse for the announcement, applauded the deal and thanked Trump for it. And Benjamin Netanyahu called ‘the best-ever friend Isreal had in the Whitehouse.’

Ahead of the announcement, the Israeli military deployed reinforcements in the occupied West Bank and thousands of Palestinians protested in the Gaza Strip.

The blueprint was drawn up under the stewardship of Jared Kushner, Trump’s Middle East adviser and son-in-law. And officially, has been 2 years in the making, in which Israel advanced its settlements at a ferocious rate to occupy more land, which now, cannot be contested.

However, it is said that the deal dates back to Trump’s electoral campaign where he needed the support of the Jewish Lobby’s to keep his election on track. As soon as he was elected Israel moved forward with further settlements and US President Donald Trump announced the United States recognition of Jerusalem as the capital of Israel and ordered the planning of the relocation of the U.S. Embassy in Israel from Tel Aviv to Jerusalem.

The Deal of the Century – What does it propose?

Settlement Freeze – The White House later said that Israel had agreed to a four-year “land freeze” for areas the plan would designate as part of a possible Palestinian state — though it appeared that would not apply to settlements in areas that could remain under permanent Israeli control under the proposal.

Jerusalem belongs to Israel – Trump calls it a “realistic two-state solution.” He said that Jerusalem would remain Israel’s “undivided capital” under the proposed plan. However, he went on to say that a future Palestinian state’s capital should be made up of parts of East Jerusalem in a kind of joint-territory agreement.

A peace process involving only one party – Democratic Senator Chris Van Hollen dubbed Trump’s proposal the “anti-peace plan” that excludes the Palestinians. “Claiming to advance peace without the involvement of one party to the conflict is a diplomatic hoax that undermines the chance of a genuine two-state solution,” he said. He also warned the plan would lead to “apartheid.”

Annexing the West Bank – The Jordan Valley annexation plan is a big part of Netanyahu’s strategy. Annexing West Bank land is a key promise meant to appeal to his hard-line nationalist base. The Palestinians see the West Bank as the heartland of a future independent state and east Jerusalem as their capital. Most of the international community supports their position, but Trump has reversed decades of U.S. foreign policy by siding more blatantly with Israel.

Recognition for Israel: Israel insists that any peace deal must include Palestinian recognition of it as the “nation-state of the Jewish people”, arguing that without this Palestinians will continue to press their own national claims to the land, causing the conflict to endure.

Settlements: Since 1967, Israel has built about 140 settlements in the occupied West Bank and East Jerusalem, as well as 121 outposts – settlements built without the government’s authorisation. They have become home to some 600,000 Israeli Jews. Settlements are considered illegal by most of the international community, though Israel disputes this. Palestinians say all settlements must be removed for a Palestinian state to be viable. Mr Netanyahu has vowed not only to never to uproot any settlements but to bring them under Israeli sovereignty.

Over the past few years, since Donald Trump’s electoral victory, the White House has cut funding for Palestinian refugees, moved the U.S. embassy to Jerusalem and endorsed the annexation of the Golan Heights by Israel. The administration has held no meetings with elected Palestinian leaders and closed the Palestinian diplomatic office in Washington.

In June, the White House, without much fanfare, released the economic portion of the peace plan that promised tens of billions of dollars for the Palestinian economy if a political solution was reached. The Palestinians and their backers in the Arab world rejected it as unworkable.

Who is backing the deal? or not outright criticising it!

EU leaders have welcomed the deal with Prime Minister Boris Johnson backing Trumps efforts and Foreign Secretary Dominic Raab urged the Palestinians to give the plans “genuine and fair consideration and explore whether they might prove a first step on the road back to negotiations”.

Germany was a bit more sceptical, although they appreciate the effort in a statement by the German Foreign Minister Heiko Maas welcomed “every impulse to get the long-stalled Middle East peace process back up and running” and would pay close attention to the detail of the plan. However, he added that “only a negotiated two-state solution that is acceptable to both parties can lead to a lasting peace between Israelis and Palestinians.”

Jordan gave the plan a relatively sombre reaction, saying it remained committed to a two-state solution based on Israel’s pre-1967 lines. It also said it rejected any unilateral move by Israel, referring to the annexation plan.

Egypt, the first Arab country to reach a peace deal with Israel, urged Israelis and Palestinians to carefully study the plan. The European Union also said it needed to study it more closely.

Saudi Arabia is on the fence, Saudi Arabia’s King Salman reassured the Kingdom’s commitment to the Palestinian issue and Palestinian rights, in a phone call with Palestinian President Mahmoud Abbas, but has not come out and made any criticism towards the deal. Saudi Arabia will be paying for the development of Palestine once a deal has been reached.

United Nations Secretary-General Antonio Guterres according to his spokesperson Stephane Dujarric said the UN supports two states living in peace and security within recognised borders, on the basis of the pre-1967 borders.

Who is against the deal?

Palestinian leaders had said they were not invited to Washington, and that no plan could work without them. This announcement has, in fact, led to a rare unity amongst the Palestinian authorities. With president Mahmood Abbas reaching out to his rivals and scheduling a meeting. Hamas and Fatah, will join hands on Tuesday as they meet in the West Bank city of Ramallah to oppose the US proposed Middle East peace plan.

On Monday Palestinian leader Mahmoud Abbas said he would not agree to any deal that did not secure a two-state solution. That formula, the basis for many years of frustrating international peace efforts, envisages Israel co-existing with a Palestinian state.

Iranian officials categorically dismissed the so-called “peace proposal” as “a plan of imposition and sanctions”. Iran’s foreign ministry said in a statement said the proposal was the “treason of the century” and bound to fail. It went on to say “The shameful peace plan imposed by America on the Palestinians is the treason of the century and doomed to fail,” it said.

Numan Kurtulmus, deputy chairman of Turkey’s ruling Justice and Development Party (AK), slammed Trump’s statements on Jerusalem, saying: “No, Trump! Jerusalem is the capital of the Palestinian state and the heart of the Islamic world!”

Calling the plan “deal of shame”, Lebanon’s Hezbollah movement said it was a very dangerous step which would have negative consequences on the region’s future.

The announcement came as both Trump and Netanyahu fight for their political futures.

Trump is in the midst of an impeachment battle over his alleged abuse of power and he faces difficult reelection in November. Pro-Israel evangelical Christians form a key part of his voter base and they have backed his frequent moves to bolster Israel’s position in the Middle East.

Netanyahu was formally indicted on three corruption charges on Tuesday after he abandoned an attempt to seek parliamentary immunity. As Trump announced ‘The Deal of the Century’ – the smiles were noticeable on Trumps and Netanyahu’s faces. And it was noticeable that no Palestinian officials were present during negotiations

What was the name of Israel before 1948?

The region surrounding and including Israel was known as Palestine. On 14 May 1948, David Ben-Gurion, the head of the Jewish Agency, declared “the establishment of a Jewish state in Eretz-Israel”. Stating that from now on it will be known as the State of Israel.” The then borders that were created were significantly smaller to what they are now.

Palestine can be dated back to the 5th Century

The first appearance of the term “Palestine” was in 5th century BC Ancient Greece when Herodotus wrote of a “district of Syria, called Palaistinê” between Phoenicia and Egypt in The Histories.

What is the main cause of the conflict between Israel and Palestine?

The history of the Palestinian-Israeli conflict began with the establishment of the state of Israel in 1948. This conflict came from the intercommunal violence in Mandatory Palestine between Israelis and Arabs from 1920 and erupted into full-scale hostilities in the 1947–48 civil war.

Is Palestine a country?

The borders aren’t formally set, and many areas claimed by Palestinians have been occupied by Israelis for years. More than 135 United Nations member countries recognize Palestine as an independent state, but Israel and the United States, don’t make this recognition.