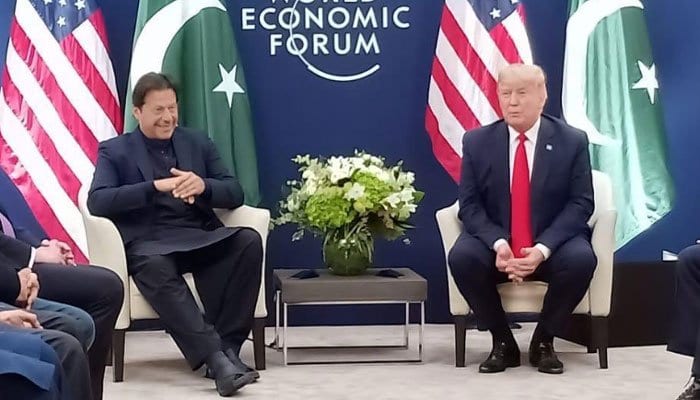 Pakistan’s Foreign Minister Shah Mehmood Qureshi has said that United States President Donald Trump had assured the Pakistani delegation at the World Economic Forum in Davos that he would soon visit Pakistan.

“US President Donald Trump has assured us that he will soon visit Pakistan,” (the current impeachment hearings may hinder this) the foreign minister said in a statement issued hours after a meeting between Prime Minister Imran Khan and the US President in Davos.

Davos is once again hosting world leaders and climate change and ongoing Iran and US conflict have taken centre stage. But Davos also gives opportunities for world leaders to discuss trade opportunities and often in the corridors of the great hall, Assisting diplomats are often seen negotiating terms with each other.

Qureshi further noted that trade and investment had also come under discussions between the two leaders, and the premier and the US President had agreed that a trade delegation from the US would visit Pakistan soon.

The foreign minister maintained that the Kashmir issue had come under discussion during the meeting as well. “US President Trump said he was concerned about the Kashmir issue and that he would extend his help to solve the issue,” said Qureshi.

Since coming into power Imran Khan has transformed, what he calls Pakistan’s outlook’ and now Pakistan is allied with peace and not conflict.  He also mentioned how Pakistan mediated between Iran and US as a symbol of growing international relations, “We have tried to ease tensions between the US and Iran and to facilitate the peace process in Afghanistan.”

The prime minister told attendees that his administration was committed to improving Pakistani youth employment rates and prospects through a new skills development program.

This year marks the 50th anniversary of the WEF, and Khan was visiting Davos at the invitation of Prof. Klaus Schwab, the forum’s founder and executive chairman.

Throughout his engagements in Switzerland, the premier shared Pakistan’s vision and achievements in the areas of economic prosperity, peace and stability, trade, healthcare, business, emerging digital markets and investment opportunities.