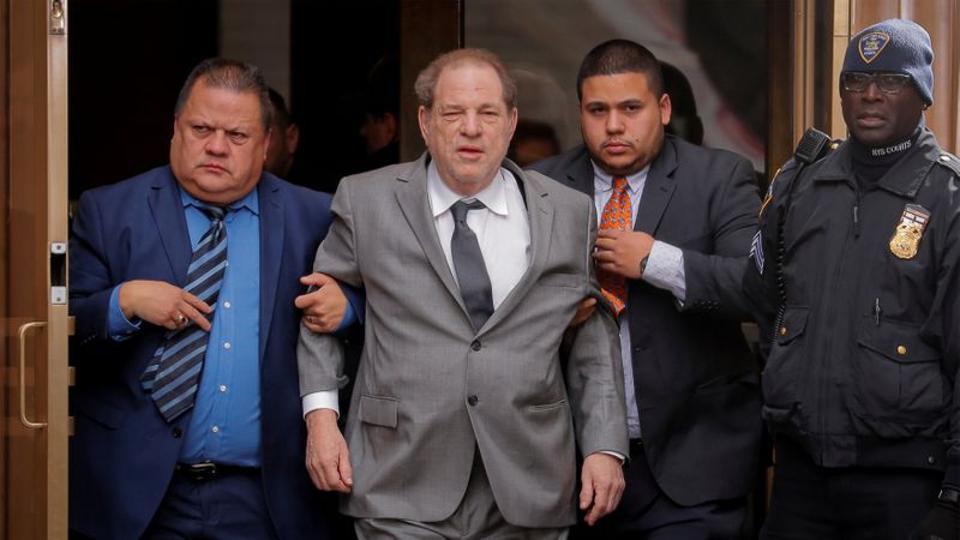 In today’s briefing update, the Sunday papers focus on the recent royal news – a deal has been reached for Meghan and Harry. They will stop all royal duties and give up their HRH titles.

In our special feature, we take a look at the Harvey Weinstein trial – ‘Bias, big-data and likes’

Freedom at a price

“Freedom… at a price” says the Sunday Express as news Prince Harry and Meghan will no longer use their HRH titles and will not receive public funds. They will now be known as Harry, Duke of Sussex and Meghan, Duchess of Sussex.

They’re out: Sussexes secure exit deal with the Queen

The Sunday Times reports of the Queen’s statement saying Harry and Meghan would “always be much-loved members of my family.” The paper reports the deal “amounts to the abdication of the royal ‘rock stars’”.

The Sunday Mirror’s front splash reports Harry and Meghan were “cut loose from the royals” as the Queen ordered a “hard Megxit”. The couple agreed to pay back £2.4m of taxpayers’ money spent on refurbishing their Windsor home.

Harry and Meghan cast out

The Sunday Telegraph says the “seismic statement” revealed the Sussexes’ departure would be “much more complete than previously thought”. Elsewhere, the paper reports the PM is preparing to impose new restrictions on low-skilled migrants moving to Britain on the first day after the Brexit transition period end in December. “No 10 to shut the door on EU migrants two years early,” it says.

PM to the cabinet: Shape up or I’ll sack you in weeks

The Observer reports Boris Johnson will warn his cabinet to focus all their energy on developing policies for post-Brexit-Britain – or face the sack in a reshuffle within weeks. The front splash also quotes the Queen as saying she was “particularly proud of how Meghan has so quickly become one of the family.”

A cold and frosty start for most. Once any patches of freezing fog clear, it will be a dry and fine day with plenty of sunshine. However, the north-west of Scotland will be cloudier and windier.

Scotland and Northern Ireland will be cloudy with a chance of drizzle. However, it will be dry and clear across England and Wales with patchy fog likely to form. Cold with a frost.

“You don’t understand! I coulda had class. I coulda been a contender. I could’ve been somebody, instead of a bum, which is what I am.” On the Waterfront, 1954

The Jury has now been selected in the Weinstein trial, but the defence has filed for a mistrial. Find out why.

CNN says a woman writing a novel about  ‘predatory older men’ has been seated on the Harvey Weinstein jury.

It one of the most high-profile cases in the US, and now the 12 jurors who will decide Harvey Weinstein’s fate have been selected. One of the jurors has been revealed to be a woman writing a novel about “predatory” older men and their relationships with younger women.

“This is my biggest fear,” Weinstein’s lead defence attorney Donna Rotunno, told CNN, referring to what she believe cant be a fair and impartial jury panel, and one subject being tainted by juror No.11.

And it’s this juror who is at the heart of why Weinstein’s legal team have filed a motion for a mistrial.

The woman was not forthcoming about her upcoming book on the jury questionnaire, Weinstein’s team argued.

Variety asks if Harvey Weinstein’s Jury selection strategy makes any sense. They say his defence teams strategy is simply to keep white women off the panel.

Although it’s illegal to pick juror based or race or gender, the prosecutor Joan Illuzzi has accused the defence of using peremptory challenges to systematically exclude young white women.

The defence denied the accusations citing other factors in each case – one being a woman who had worked as a model.

Of the 12 jurors, two are white women. Both were seated after Weinstein’s team ran out of challenges.

“It doesn’t surprise me in the slightest that there would be a gender issue, and that the Weinstein team would be more inclined to removing women,” says Valerie Hans – a law professor who has studied juries. “I would be willing to bet they relied on empirical evidence from their research to exercise these peremptory challenges.”

Reuters reports the jury selection was bias, big data and likes. They say that when the potential jurors were selected, the lawyers already knew who had used the #MeToo hashtag on Twitter or those who have criticised victims of sexual harassment on Facebook.

The intersection of big data capabilities and the prevalence of social media has changed the business of jury research in the US – which was once getting information from car bumper stickers or the appearance of a home.

But now, consultants scour Facebook, Twitter, Reddit and other social media platforms for hard-to-find comments or “likes” in discussion groups or even selfies of a juror wearing a potentially biased t-shirt.

“This is a whole new generation of information then we had in the past,” said Jeffery Frederick, the director of Jury Research Services at the National Legal Research Group Inc.

Harvey Weinstein, the former Hollywood movie producer on trial for decades of sexual assault and rape.