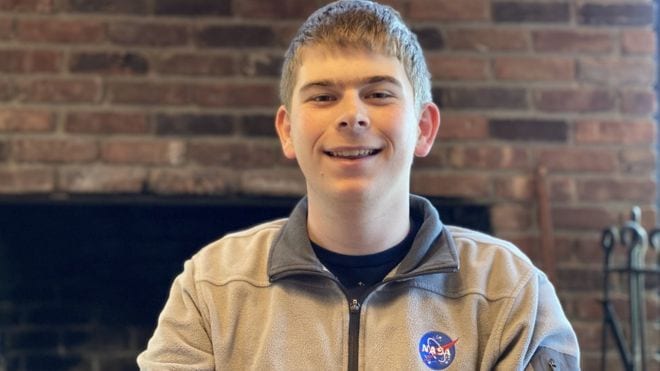 Wolf Cukier, 17, made quite the impression during the third day of his NASA internship.

The teen was helping out at the space agency in the United States and was checking images from its super-strength satellite when he noticed something strange.

It was a new planet, 1,300 light-years away from Earth, NASA has confirmed.

Wolf is now back at high school in New York but took some time to chat to Radio 1 about his discovery.

The teen explained he got the two-month placement with NASA’s Goddard Space Flight Centre last summer. He was given the job of examining the data beamed back via a space telescope that looks for planets outside of our solar system.

“I was searching for a planet that orbits two stars,” he explained.

He was looking for changes in the brightness of any stars that might suggest the shadow of a planet passing in front.

Wolf noticed something blocking the light of two stars and flagged it. “I took it to my mentor, we looked at the data from the stars and noticed two additional dips in light, so we started doing analysis to see if it actually could be a planet.”

Soon other scientist got involved and upon further inspection, it revealed a planet almost 6.9 times as large as Earth. It was named TOI 1338 b.

The new planet is a circumbinary planet – meaning it orbits around two stars rather than the usual one. But the planet is not habitable, its likely to be extremely hot and probably doesn’t have a surface.

Wolf certainly has his eye on a space research career. And he left his internship with the space agency “impressed” by what he had discovered.

“My mentor has been very supportive and excited. I think NASA is surprised with the amount of attention this has been getting.”

Talking about his future Wolf said after high school he plans on attending university.

“When I’m there I’m planning to study physics and astrophysics,” he said. “From there, a career in space research is appealing.”