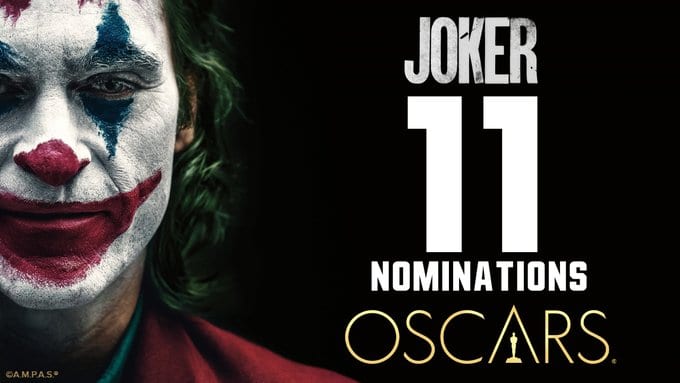 This year’s Oscar nominations have been announced, and its a familiar sight. Once again leading the pack is white men.

Joker, starring Joaquin Phoenix, is up for 11 awards. The controversial film is followed by The Irishman, Once Upon a Time in Hollywood and 1917 which all have 10 nods each.

However, the prestigious Academy Awards are facing criticism once again for the lack of diversity. Only one black person made it into the acting category and one non-white director was chosen for the director’s category. Once again, no women were nominated for Best Director.

In 2016, the Oscars faced the #OscarsSoWhite backlash which led to the film academy diversifying their membership. This year is the least diverse line-up since that backlash.

There are more PoC in this picture than got nominated for acting awards for the Oscars #OscarsSoWhite pic.twitter.com/z4RCJTPtKz

This issue is far beyond the award shows, it is an industry-wide problem. It’s no secret that fewer diverse movies get green-lighted for production in the first place – so its slim pickings when award season rolls around.

Viola Davis, who became the first African-American to win an Emmy for best actress in a drama opened up dialogue on the wider industry problem

“You cannot win an Emmy for roles that are simply not there,” she said.

British actress and singer Cynthia Erivo was selected in the Best Supporting Actress category, for her role in Harriet. She has also received a nod in the original song category.

In the Directors group, no women were selected. Actress Issa Raw, who presented the nominees, said: “Congratulations to all those men.”

It is the 87th time no women have been nominated in the category in the awards’ 92 year history. Only one woman has ever won – Kathryn Bigelow for The Hurt Locker in 2010.

Many had hoped Little Women director Great Gerwig might get a nod after she became the fifth woman to appear on the Directors list two years ago for her debut feature Ladybird.

#Oscars: No women were nominated for best director https://t.co/eEYxKfTI8i pic.twitter.com/qsdTkZOJ3h