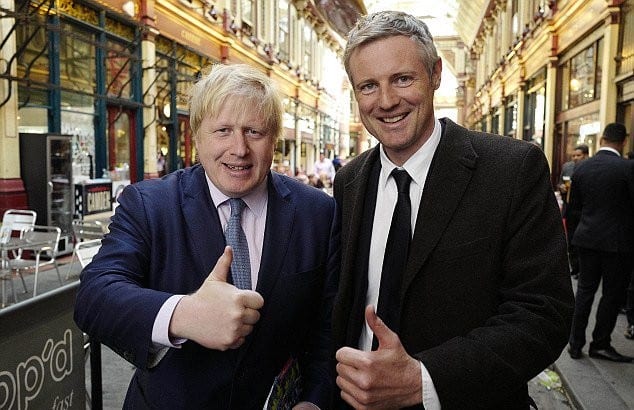 Prime Minister Boris Johnson has appointed Zac Goldsmith in the House of Lords, much to the disapproval of Labour and Muslim Council of Britain (MCB). His appointment allows him to keep his ministerial job despite losing his seat in the election.

The election was the second time Goldsmith was ousted by the Liberal Democrats in Richmond Park. But now he’s been made a life peer and reappointed as environment minister by the PM.

Labour has accused the prime minister of presiding over “government-appointed jobs for mates.” Goldsmith just happens to be friends with Johnson and his partner.

‘Racism rewarded by the government’

The Secretary-General of the MCB said, “For Zac Goldsmith to be given a peerage and position in Cabinet despite his racist campaign for London mayor, illustrates how racism is not only accepted but even rewarded by the government.

“Serious questions must be asked about how the Conservative Party can say one thing and do the complete opposite when it comes to Islamophobia.”

Labour’s Shadow Cabinet Minister, Jon Trickett said on the appointment, “It says everything you need to know about Boris Johnson’s respect for democracy that he has ignored the voters of Richmond Park and appointed Goldsmith to government. The public deserves better than a government appointed by ‘jobs for mates’.

“At a time when the Conservatives are investigating racism in their party, they have appointed the person who ran an overtly racist campaign against Sadiq Khan. Zac Goldsmith is not fit to hold any government position.”

Being pals with the PM pays off

“The Queen has been pleased to signify her intention of conferring a peerage of the United Kingdom for life on Zac Goldsmith,” they added.