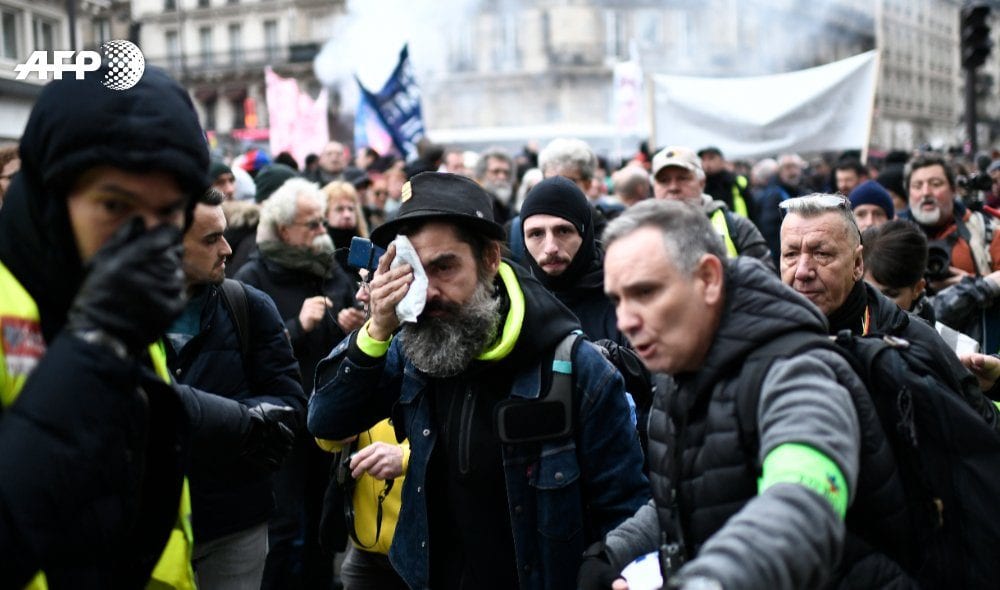 French president Marcorns 2020 has started with the same verve as 2019 as thousands of people demonstrated on Saturday against President Macron´s proposed pension reforms which have sparked a month-long transport strike.

Labour Unions have rejected the scheme and has hit out at the government in particular over a “pivot age” of 64 for a full pension, which will effectively force millions to work beyond the current official retirement age of 62.

The marchers set off after midday from the Gare de Lyon railway station in eastern Paris behind a giant banner reading “Macron, withdraw your plan; save and improve our retirements,” heading for Gare de l´Est, four kilometres (2.5 miles) to the north.

Reaching the opera house at Bastille square, some demonstrators shouted: “we don´t want the grandfather clause” referring to proposals for new opera dancers to lose the current generous pension benefits enjoyed by older colleagues who can currently retire at 42.

The protests saw a resurgence of the ‘Gilets Jaunes’ ( Yellow Vests ) as some protesters wore the high vis yellow vests which over the past year have become symbolic of opposition to Macron´s attempts at reforms he says will rationalise France´s 42 separate pension regimes into a single points-based system.

So far, more than 60 performances at the Paris opera´s historic Garnier and modern Bastille stages have been cancelled, leading to losses of more than 12 million euros ($13.4 million) in ticket sales.

Now in their 25th day, France’s nationwide strikes against the government’s pension reform plans are the longest in more than 30 years. With no retreat in sight from either the government or the unions, today’s strikes could soon beat that record, forcing strikers to find creative ways to cope.

To make that possible, it’s relying on everyday solidarity. Collection jars are a regular sight at strike marches. But the bulk of fundraising today is done online. A crowdfunding campaign launched by SUD-Rail has raised more than €43,000 to date. Other unions, including the CFDT and UNSA, have also launched independent crowdfunding campaigns.

Several other professions, including train drivers, also enjoy special pension provisions. Macron wants to simplify the system and is banking on support falling for the strikers the longer the disruption goes on amid what is now the longest continuous train strike in French history.

Some 3,500 protested in Paris, according to police figures. Smaller marches took place in the southwestern cities of Marseille and Toulouse.

A new poll published Friday showed a majority of 61 percent still support the strike, although that was five points lower than a December 19 survey, according to pollster Odoxa.

The strikes have been ongoing since December 5, upsetting travel plans and hitting shops and other businesses over the key Christmas period.

After a month of disruptions, Macron will on Monday held his first cabinet meeting of 2020. The following day discussions with union leaders are set to resume, but so far neither side has appeared ready to give much ground.

Unions have called another day of mass demonstrations for Thursday, when teachers, hospital workers and others are expected to join the strike.